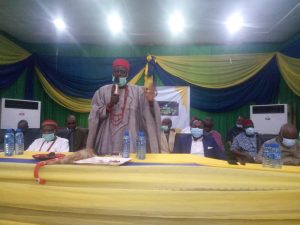 Anambra West Local Government Area has unveiled its twelve years development plan, anchored on seven key areas of intervention such as Politics and Strategic Positioning, Agriculture and Natural Resources Development amongst others.

Development is critical in every society though a lot of socioeconomic and sociopolitical issues hinder the growth of communities, and in other to tackle the issues that hinder development, critical stakeholders from Anambra West rallied round, set up a committee which developed a twelve years plan for the Local Government Area.

Speaking during the event, Governor Willie Obiano, noted that planning is important for every society and enterprise to excel, which made the state government inaugurate a committee for the state vision 2050 plan.

Represented by the Commissioner for Land, Physical Planning and Rural Development; Mr. Bonaventure Enemali, emphasized that it is important for all hands to be on deck for the progress and development of the local government.

The Transition Committee Chairman of Anambra West Local Government Area, Sir Sylvester Okafor, noted that the plan must be an achievable one through an outlined approach and used the opportunity to admonish the people against vandalizing government infrastructure as the first step to bringing growth and development.

In his remark the Chairman of the Committee, Igwe Pius Omachonu and his Vice, Professor Chukwuemeka Jaja-Nwanegbo, revealed that the plan is tailored in a way to make it achievable through an implementation monitoring process, which is divided into four years each, after which it will be reviewed, including harnessing the agricultural potentials amongst others in the local government.

Other Participants at the event who spoke to ABS were Messrs Ojukwu Obakasi and Hycinth Okoye, remarked that they are in no doubt that the plan will ensure development and growth in the Local Government Area.