Anambra State Police Command said it has arrested three suspects in connection with cultism and other violent crimes in the State.

Items recovered from the suspects include one English Beretta Pistol, one locally fabricated gun, one live ammunition, one motorcycle, three phones, cash of twenty-two thousand four hundred naira, and some substance suspected to be hard drugs.

According to a statement signed by the State Police Public Relations Officer, DSP Tochukwu Ikenga, Police Operatives at about 11pm on second March 2022, while working on credible information, stormed a criminal hideout in Awada, Idemili North Local Government Area and arrested One Onyedika Okwuibe, male, aged twenty-five, and recovered a gun. 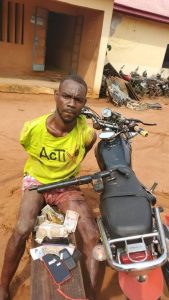 The statement said interrogation of Onyedika led to the arrest of one Chimaobi Ezeoke, whom Onyedika alleged gave him the gun, and both confessed to be members of Vikings cult group.

The statement said the suspect, Samuel, and one other gang member still at large and operating with unregistered motorcycle had attacked Heca Filling Station along Umunze/Ekwulobia road, and dispossessed the sales girl of cash made from sales, but were later intercepted by Vigilante men working with the Police.

It said  the suspects have been interrogated and operations are ongoing to nab other members of the syndicate.

While reiterating the unwavering commitment of the Command towards weeding out all criminal elements, the statement quoted the Commissioner of Police, Echeng Echeng as enjoining law-abiding citizens of the State to remain vigilant and continue to support the Command in the fight against crime and all shades of criminality, adding that the suspects shall be charged to court once investigations are concluded.