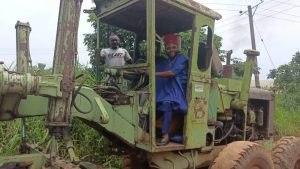 The road, which has been inaugurated, is the first of its kind in the history of the constituency.

House of Assembly Correspondent, Chukwuemeka Modilim reports that the project brought joy to the people as they sang joyfully thanking the lawmaker for meeting their most pressing need.

In his remark, Honourable Nwokoye explained that the project will facilitate movement of farm produce by the people of Achalla Community, whose people are predominantly farmers.

He stated that he embarked on the project to encourage well-to-do individuals in his constituency to key into the think home philosophy of Governor Obiano to guarantee rapid development of the state, even as he urged the state government to complete all ongoing roads in the council area.

On his part, the traditional ruler of Achalla, Igwe Ositadimma Nwokedi, who lauded the initiative, noted that Honourable Nwokoye has demonstrated his commitment to the welfare of his people and called on others to emulate him.

In his speech, the contractor handling the project, Mr. Chuka Okafor disclosed that the legislator has fully mobilized them to site and assured their readiness to deliver on scheduled.

For others, including the former member that represented the constituency, Honourable Boniface Okonkwo, the Director General, Honourable John Nwokoye Campaign Organization, Chief Chukwukadibia Onwenukwue and APGA Chairman for Mgbakwu Ward, Mr. Emeka Akaobi, Honourable Nwokoye has written his name in the sands of time by being the first legislator in Awka North Constituency to take up road construction.