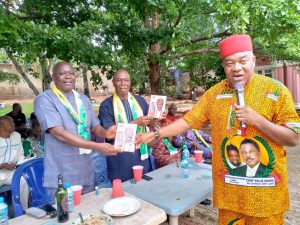 Members of the All Progressives Grand Alliance, APGA, in Ward One, Enugwu-Ukwu, Njikoka Local Government Area, have thrown their weight behind Professor Chukwuma Soludo, as the sole standard bearer of the party for the November election in Anambra State.

The ward members, who stated this at a stakeholders’ meeting held at Umuakwu Village, Enugwu-Ukwu, noted that Professor Soludo represents the collective choice of all members of the party and Anambra people at large, and pledged their unalloyed support to the erstwhile Governor of Central Bank of Nigeria and his running mate, Dr Onyekachukwu Ibezim.

Correspondent, Daniel Ezeigwe  t reports  that the party members also applauded Governor Willie Obiano for spearheading a visionary administration that has seen developmental breakthroughs across all sectors of the State’s economy over the past seven years, insisting that Professor Soludo,  can consolidate on those successes.

Addressing the ward members, the running mate to Professor Soludo in the November election, Dr Onyekachukwu Ibezim, said that the one-time apex bank’s Governor has unbeatable credentials that make him a perfect fit for the job.

Dr Ibezim, who also disclosed that APGA is the only organized political structure that can negotiate the Igbo aspirations, commended members of the ward for being vocal in their support.

In his remarks, the Chairman of All Progressives Grand Alliance in Njikoka Local Government Area, Mr Charles Okongwu, who led other APGA Executive members from the Local Government to the meeting, stated that the primary election that produced Professor Soludo was a legitimate and peaceful process that represented the party’s choice, hence, Professor Soludo remains the only choice of all APGA members.

He also stated that the eighteen wards in the Local Government Area were  ready for a clean sweep in the November election, having recorded an excellent voting return during the re-election of Governor Obiano in 2017, and at the just-concluded APGA governorship primary election in July this year.

Addressing the ward members, the convener of the meeting and Managing Director and Chief Executive Officer of Anambra Broadcasting Service, ABS, Dr Uche Nworah, also from the ward, urged them to remain resilient in ensuring victory of the party in November and reminded them that APGA remains one indivisible platform that represents all interests.

Dr Nworah, who also briefed members of his ward on the unfolding events in the party, asked them to keep the faith in Governor Obiano’s progressive agenda, insisting that members of the party believe strongly in his transitional vision, which supports Professor Soludo’s candidacy, as the sole standard bearer of APGA for the November election.

Dr Nworah also used the avenue to present copies of the book “Governor Willie Obiano: Seven Years of Delivering Good Governance in Anambra State” to the Local Government Executive members of the party.

A former Deputy Local Government Chairman of Njikoka, Chief Frank Nwandu, who also attended the stakeholders’ meeting, noted that Enugwu-Ukwu remains an APGA dominated area  and will continue to support the party, because of what it represents.