Communities and wards in the areas converged on the Council headquarters at Neni and Abagana to canvass support for the party.

Governor Willie Obiano led Board of Trustee members, stakeholders and party faithful to the event.

Government House Correspondent, Ejike Abana reports that Governor Obiano thanked Ndi Anaocha and Njikoka for the support they have given his administration, asking Ndi Anambra to ensure that they thumb print on the box bearing APGA as against in-between two boxes, to avoid invalid votes.

The Governor pleaded with them to unite and help APGA win which he described as the hope of Ndigbo, assuring that when Professor Chukwuma Soludo succeeds him, he will perform better than he did. 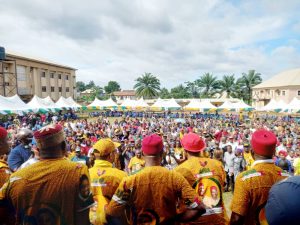 Also speaking, the member representing Anambra East and West Federal Constituency, Chief Chinedu Obidigwe, charged the people to protect their votes and the member representing Anaocha, Dunukofia and Njikoka Federal Constituency, Chief Dozie Nwankwo affirmed that because of Governor Obiano remarkable achievements , they would give Soludo their tital support, assuring that they will ensure delivery of one hundred percent of their votes for APGA.

The member representing Anaocha Constituency Two at the State House of Assembly, Chief Ejike Okechukwu and his counterpart representing Njikoka Constituency Two, Sir Pete Ibida said they have agreed to queue behind the APGA candidate because of his pedigree, while Chief Chukwuemeka Odumegwu Ojukwu Junior  in his remarks restated that APGA is the inheritance of Ndigbo. 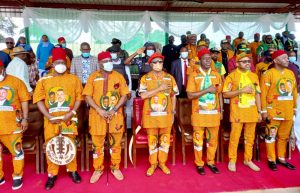 In their separate speeches, the Attorney General and Commissioner for Justice, Barrister Uju Nworgu and her counterpart in the  Youth Empowerment and Creative Economy Ministry, Professor, Theresa Obiekezie

asked the people to go back to their wards and canvass for votes from house to house.

While calling on the people to come out and vote APGA, the Transition Committee Chairman for Anaocha, Chief Estate Nnedum and his Njikoka counterpart, Mr. George Obiozo said that communities in their councils benefitted much from APGA administration, expressing optimism that the governor will end on a very strong note.

While expressing optimism that the election will be free and fair, Professor Soludo reiterated that with all the testimonies of good governance by  APGA administrations  in Anambra, it remains the only party for Ndigbo, reassuring that he would continue from where the governor will stop in a bid to fulfill promises made to the people as no other party has the plans he has for Ndi Anambra when they take over. 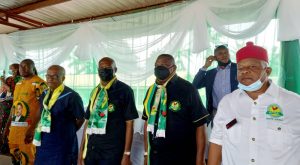 Defectors from other political parties were received at the function.