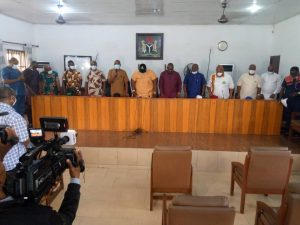 Ahead of the November sixth governorship election in Anambra State, political parties participating in the exercise have urged the Independent National Electoral Commission, INEC, to dissociate itself from any sharp practices capable of subverting the will of the electorate.

In an open letter to INEC Chairman, Professor Mahmood Yakubu after deliberations in Awka, fourteen of the political parties, among other things, condemned any attempt by the Commission to use Owerri, the Imo State capital as what they called staging-base for the rigging of Anambra governorship election, and vowed to use everything within their means to resist such attempt.

The letter signed by Chairmen of the political parties, including the Anambra State Chairman and Secretary of Inter Party Advisory Committee, Messrs Uchenna Ugwuoji and Eminent Uzochukwu, recalled that Governor Hope Uzodimma, of Imo State was quoted  to have boasted that “the All Progressives Congress, APC, will deploy all means, to win the November sixth, governorship election in Anambra State.

The political parties further alleged that reported clandestine recruitment of INEC Adhoc Staff from tertiary institutions domiciled in Imo State for the conduct of the Anambra governorship election further lends credence to the rigging plans, in addition to what they termed “curious and most outlandish the decision” of INEC to use its facility in Owerri, for storage of non-sensitive materials meant for the exercise over destruction of the Commission’s office in Anambra State.

Correspondent, Joseph Egbeocha reports that INEC has however rescinded the decision to use its facility in Imo State for the storage and distribution of materials for Anambra election, noting that with possibility of timely completion of ongoing work at its Anambra office this month, the Commission is in better position to operate from Awka.