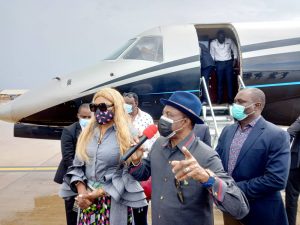 Anambra State Governor, Chief Willie Obiano has described the All Progressives Grand Alliance, APGA manifesto as one to beat in the forthcoming gubernatorial election.

Governor Obiano  was speaking shortly after he arrived from Abuja with his wife, at the Anambra International Cargo and Passenger Airport Umueri.

While pointing out that the flight took exactly thirty-eight minutes from Abuja, the governor said that he has ensured transformation of Anambra State with the right legacy projects.

According to him, the airport will begin commercial flight operation within next month, explaining that the delay was because of the three super modern fire trucks called Zigler, ordered and paid for, six months ago from Germany, but are being built to specification.

He reiterated that his administration did not borrow money to finance the airport project, noting that with the commissioning of the Agu-Awka Sub-Station by Vice President Yemi Osinbajo, which has direct supply to the airport, it will be serviced with twenty-four hour power supply and encouraged contractors to tap into the EEDC supply that is now constant.

From the terminal building, the governor and his wife were taken to the control tower through the lift, where he observed that the equipment was  already in place.

Meanwhile, finishing touches are being given to the airport as even the carousel is being installed, among other gadgets.