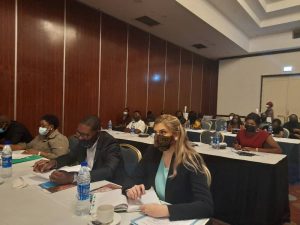 Nigeria has emerged as the main transit and export hub for trafficking in elephant ivory, pangolin scales, and other wildlife.

However,  at the federal level, the laws governing international wildlife trafficking in the country are relatively weak.

This was the worry of stakeholders at the official launch of “analysis of legal framework for combating wildlife crime in Nigeria held in Abuja.

The report, showcased that the challenges of improving Nigeria’s ability to counter wildlife trafficking from and to its borders are immense.

Addressing participants at the event, the Minister of State for Environment,  Chief Sharon Ikeazor, represented by the Director General of National Environmental Standards and Regulations Enforcement Agency, NESREA, Mr Aliyu Jauro, expressed satisfaction that there is increased concern about tangible and sustainable progress in responding to Nigeria ‘s most pressing challenges which include ensuring that the country’s wildlife and forests are safe from crime, protecting the country’s fisheries, marine resources and blue economy from illegal exploitation and hazardous wastes.

The Minister lamented that Nigeria has increasingly become a transit point for trafficking in illicit wildlife and forest products especially elephant tusks according to a UNODC world Crime Report 2020.

The United States Embassy Charge d’Affaires Ms Kathleen FitzGibbon who welcomed participants to the event, emphasized the critical need for greater communication and collaboration between investigative, prosecutorial, and judicial bodies to bring about quicker justice and sentences which will hold violators accountable.

She said by working together, more rapid progress will be made in eliminating, neutralizing, and disrupting wildlife trafficking adding that there is need to do more to raise public indignation about the ugly crime which she noted, imperils the planet’s biodiversity, funds organized crime, spreads disease like COVID-19, and threatens the very existence of Nigeria’s unique and beautiful animals.

According to UNODC’s Deputy Country Representative in Nigeria, Ms. Elizabeth Bayer, there has been a significant rise in wildlife trafficking in Nigeria since twenty seventeen, stressing that illicit trade in wildlife poses a threat to the nation’s biodiversity thereby limiting opportunities to thrive.

Others who spoke on the occasion include the Executive Director, Environmental Investigation Agency United Kingdom, Mrs Mary Rice, who explained that networks responsible for trafficking wildlife from Nigeria are organized and well-coordinated, but the law enforcement response is fragmented and weak, hence the need for a coordinated multi-agency approach to strategically disrupt wildlife crime networks while the Executive Director, Afrixa Nature Investors, Mr Tunde Morakinyo, is of the opinion that for too long, Nigeria has been rapidly losing its precious biodiversity to crime and corruption.