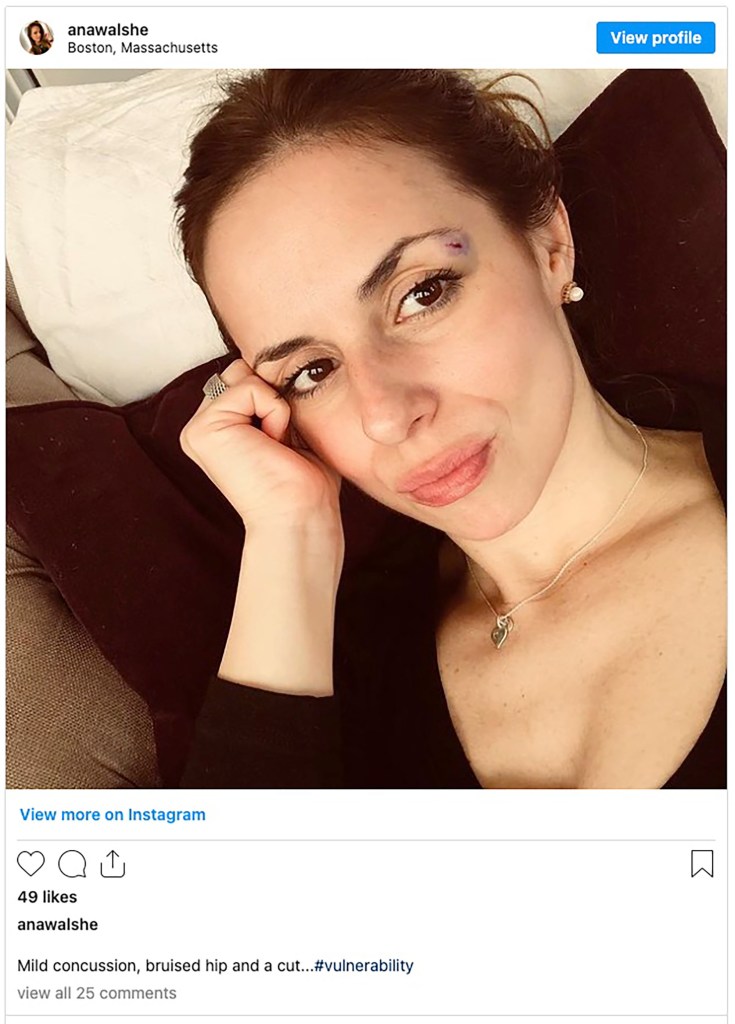 Ana Walshe, a missing mother from Massachusetts, uploaded a photo of herself with a suspicious injury above her left eye, only to subsequently modify the caption before filing a letter on her husband’s behalf in his art fraud case.

“Mild concussion, hip bruise, and a cut…#vulnerability,” reads the caption of a photograph that was posted on May 21, 2018, but appears to have been modified almost eight months earlier.

It is unclear what the original title was, but the alterations were made around the same time Walshe composed a letter praising her husband, art forger Brian Walshe, in which she pleaded with Judge Douglas Woodcock to grant him a no-jail sentence.

The real estate executive gushed about how much “joy” and “comfort” Brian brought to the family months before he was accused with obstructing the investigation into her New Year’s Day disappearance.

Evidently, Ana Walshe altered the caption around the time she pleaded for leniency when her husband, Brian, was sentenced for art fraud.

“During these eight months, our family was able to celebrate many milestones together,” Ana said, alluding to the time Brian was on house arrest awaiting sentencing for selling two counterfeit Andy Warhol artworks for $80,000 on eBay.

In addition, she complimented him for assisting her mother in December 2021, when she suffered a brain aneurysm.

Ana wrote to the judge on June 1, 2022, “Not only did he save her life, but he also brought her and her family comfort and joy during her illness.”

Brian Walshe entered a not guilty plea for obstructing the police investigation.
AP

“Certainly the husband,” wrote one.

Another speculated that her spouse was responsible, saying, “Completely suspicious.”

Former US Assistant Attorney Neama Rahman told Fox News Digital that Ana being a victim of domestic violence is a “reasonable explanation.”

“This is merely speculation, but it appears that she was punched,” he told the news site, which said that Ana had modified other articles before delivering the letter to the judge.

“This evening at 7 o’clock, please join my husband Brian as he hosts his workshop.” “Link to Eventbrite in the bio,” reads one modified post.

The November 16, 2021 Eventbrite event apparently aimed to help guests understand how their “emotional world is hindering their financial health.”

Friends of the Walshs reported that she acted erratically in the months preceding her disappearance, promising “a big surprise” in the new year.

Late in December, she reportedly liquidated assets, including an apartment and a vehicle, for cash, according to the sources.

Ana Walshe in an undated photograph taken prior to her disappearance.
The Instagram account of Ana Walshe

This week, while examining a waste facility in Peabody, around an hour from the couple’s residence, authorities discovered probable evidence in her disappearance, including a hatchet, a bloody rug, and cleaning materials.

A neighbor told The Post that police also seized two dumpsters and a trash compactor from the condominium complex where Brian’s mother resides in Swampscott.

Brian is being jailed on a $500,000 bond after entering a not guilty plea to obstructing the police investigation.