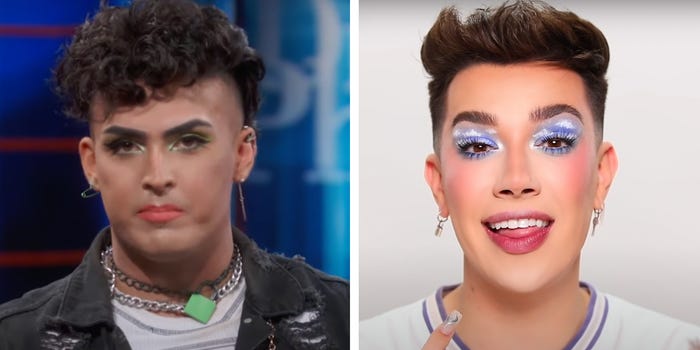 A self-described online catfish claimed to have gained thousands of dollars by impersonating well-known YouTubers and tricking Instagram users into sending him images of themselves in their underwear.

The guy was a guest on a September 7 edition of “Dr. Phil,” the TV chat show presented by psychologist Phil McGraw. He was known by the names Vincent and “White Plastic.”

He said that he would ask the tiny or new influencers he was targeting to email him nude photos of themselves, which he would then sell to web sites.

He continued, saying that while catfishing is his pastime, it is also a “multi-thousand dollar company” and that he employs helpers.

He claimed to have impersonated the Nelk Boys, a YouTube collective with 22 million and 3.6 million subscribers, respectively, as James Charles and Steve Deleonardis, also known as SteveWillDoIt.

Catfishing is a form of social media fraud in which a person assumes a new identity in order to entice a person into a romantic connection for financial benefit. White Plastic claimed to have earned “hundreds and hundreds” from each occurrence.

“I’m not killing people, I’m not doing anything insane, so I don’t believe it’s bad in my views,” White Plastic said, adding that he had been catfishing people online for many years.

He began by targeting regular people before realising it was more “thrilling” to target tiny influencers.

You deserve to get catfished because you didn’t do your research if you’re stupid enough to email nude pictures of yourself to someone you’ve never met online, he said.

On the episode, three creators said that White Plastic, who was impersonating a superstar, had texted them.

One of them claimed to have gotten a message from someone she thought to be Deleonardis and goes by the online handle Diamond. Diamond has 47,000 Instagram followers.

She claimed, “It began becoming extremely creepy and personal, and I believed I was in love. One thing led to another.”

Another artist claimed to have sought to work with influencer James Charles by leaving his contact information in the comments area of one of his posts.

Larz, who goes by the nickname, has 423,000 Instagram followers. He said that after seeing Charles on FaceTime for a little period of time, he got a text message from a number he thought belonged to Charles a short while later.

Larz said he gave the catfish his address and supplied money as well.

Although he was initially dubious, the third creator, who only went by the name William, claimed White Plastic deceived him by pretending to be rapper Lil Nas X.

Although he was dubious at first, he thought the two had a mutual friend, and the singer’s brothers had followed him on Instagram, which led him to believe he was actually speaking with the singer.

In the past, William had been duped by a catfish and had been on MTV’s “Catfish: The TV Show.”

Online impersonation is not inherently unlawful, but according to the legal guide HG.org, catfishing is deemed fraud when done to get “anything of profit,” like a nude picture.

According to Cornell Law School, “fraud in the inducement” under US law is punished by a $10,000 maximum fine or up to five years in jail.

Representatives for James Charles, Steve Deleonardis, Diamond, White Plastic, Larz, William, and others did not immediately reply to Insider’s request for comment.