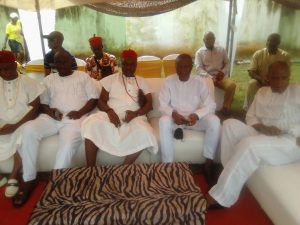 The ninth lunar month is considered as one of the best months in Igboland as it marks the full harvest season.

Based on this, Amichi Community in Nnewi South Council Area, has  celebrated its 2021 new yam festival in a grand style as one of the sons gifted their traditional ruler, Igwe Alphonsus Ezeoke with a brand new Sienna car.

ABS Nnewi Bureau Chief, Chimezie Umeh, reports that the festival started with a procession by the traditional ruler in company of his cabinet members followed by paying of homage by villages and well-wishers while masquerade displays and cultural dances added glamour.

In his prayers, Igwe Ezeoke, thanked God for the understanding, harmonious co-existence, his blessings and favour to the people of Amichi, asking Him to keep flourishing the town with good harvest.

Speaking shortly after the event, the President General Elect, Amichi Development Union, Mr. Chukwuemek Udogu thanked God for His love and blessings to Amichi people and urged the people to live in the spirit of brotherhood so that more development will be achieved.

In his speech, a philanthropist, Mr. Remy Ogboroaha expressed delight and satisfaction over the development and progress brought so far by Igwe Ezeoke and prayed God to give him sound health of body and mind as he leads the people of the community.

A member of the royal family, Chief Marvelous Ezeoke also felicitated with Igwe Ezeoke asking God to continue to bless Ndi Amichi, both at home and in diaspora.

Among the dignitaries that graced the occasion were Igwe Chidi Ezenwugo of Uga, the Managing Director Anambra Rice, Chief Aka Egwuọnwụ  and  Chief Oscar Egwuonwu.