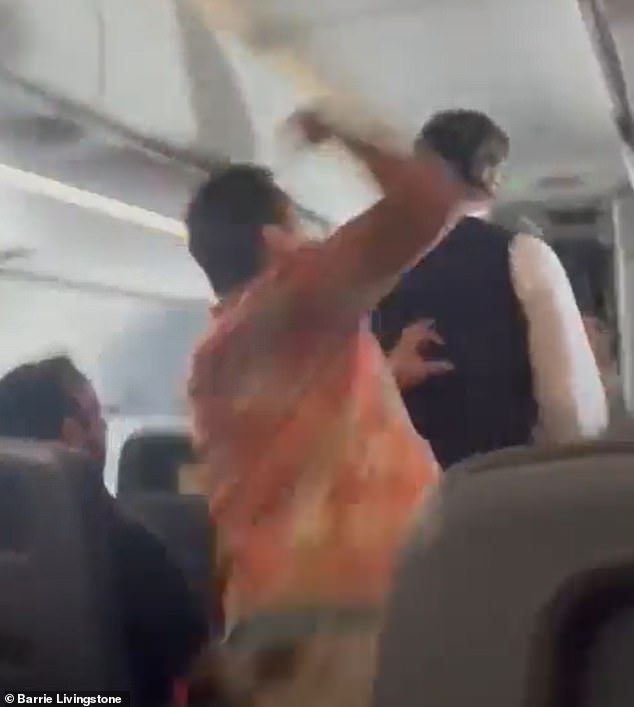 Unbelievable video captures the moment an American Airlines customer assaulted an innocent flight attendant, creeping up behind him and striking him in the face after he was turned down for a coffee.

The incident happened on Flight 377 on Wednesday from San Jose del Cabo to LAX when he tried to move to a seat close to the first-class cabin, and the passenger was taken from the aircraft after it landed in the United States.

Alexander Tung Cuu Lee, 33, of Westminster, was arrested upon arrival at the airport on suspicion of interfering with a flight crew.

Lee, who is accused of threatening the male attendant before the assault was captured on camera, may spend up to 20 years in jail if proven guilty of the charge, a federal felony.

He’s scheduled to appear in court for the first time on Thursday in Los Angeles’s downtown.

According to reports, the incident began when the suspect began babbling to himself incoherently about “murderers” on the California-bound jet, allegedly saying “there are 10 killers on the plane.”

The incident is seen on camera by traveller Barrie Livingstone, with the male flight attendant standing in the aisle in front of the suspect as he is hidden from view and out of his seat.

In what seems to be a heated discussion, the two appear to be speaking. Are you threatening me, the male attendant asks the irate tourist again.

Off-screen, the suspect seems to stumble in the direction of the employee, forcing the latter to exclaim, “All right, that’s it,” before turning around to walk away from the guy.

He then turns around and moves toward the front of the aircraft as Lee unexpectedly launches an attack.

The heart-pounding film shows an angry passenger sprinting at an oblivious staff member from behind while wearing an orange Hawaiian shirt.

The suspect then smacks the attendant in the back of the head with a clenched fist while the employee’s back is turned.

I swear to God! After the apparent middle-aged suspect delivers the first strike, a passenger can be heard yelling amid the ensuing mayhem. Why are you doing that?

The employee who was assaulted is seen retrieving a phone during the following ruckus, probably to contact the police, while the attacker retreats while clearly enjoying his work before going back to his seat.

A second crew member is seen scurrying to get a set of confinement shackles.

Coincidentally, a producer for CBS San Diego station KFMB-TV was also on the flight, and he said that customers ‘helped hold’ the suspect while crew members bound him to his seat using flex cuffs, an airline-standard detention tool that looks like a zip-tie.

The airline staff doing this performance as the customers watch in wonder is captured in a different social media video.

After the jet touched down, Los Angeles Airport Police brought the suspect off the aircraft, and he has since been arrested for an investigation into the event, which may result in charges against him for a federal offence.

The individual was detained by authorities, according to an American Airlines official, and has now been permanently barred from travelling with the airline.

Speaking on the event, spokesman Derek Walls stated that American Airlines “does not accept acts of violence against our team members.”

“The person responsible for this act will never again be permitted to travel with us, and we will fully cooperate with law authorities in their investigation.”

The alleged attack was also addressed publicly by the Association of Professional Flight Attendants (APFA), a union that represents more than 26,000 flight attendants at American Airlines.

The group condemned the event in a statement issued on Thursday, calling it “hazardous” and “life-threatening,” and noting that it followed a trend of similar assaults on airline employees, perhaps endangering flight attendants.

The union also said that they will take all necessary steps to ensure that the perpetrator would be held accountable to the utmost degree permitted by law.

Julie Hendrick, the national president of the flight attendants group, said that “this aggressive conduct must cease because it endangers the safety of all passengers and staff.”

“APFA completely supports the impacted crew members and will do all within our power to see that the passenger is prosecuted to the fullest extent of the law.”

Airlines have reported more than 3,000 cases with rowdy passengers to the FAA since the start of the year, many of which involve travellers who disobey the law’s mandate that they wear face masks.

A spokeswoman for the FAA agency said it was fair to conclude that this year’s statistics are the highest ever, despite the fact that the government did not keep such data in years before.

Since declaring a “zero-tolerance policy” against disruptive passengers in January, the FAA has looked into more than 400 complaints and made public the possibility of penalties, some of which could reach $30,000.

According to FAA data, it is approximately three times the full-year average number of instances over the previous ten years.

Leaders of the main flight attendant unions, who pushed for the development of the training programmes after the terrorist events on September 11, 2001, applauded the decision. Before storming the cockpits on the day of the assaults, the terrorists who hijacked four aircraft attacked a number of passengers and flight attendants.

Because a flight attendant was the first to die, Lyn Montgomery, head of the union local that represents Southwest Airlines flight attendants, stated, “We wanted to make sure that we could defend ourselves against violent altercations, on and off the aircraft.” “Right now, it’s extremely needed, and it’s priceless.”

Sara Nelson, president of the Association of Flight Attendants, applauded TSA for resuming optional seminars despite her support for making the sessions obligatory and the rise in on-flight altercations.

The flight attendants are there to protect “the safety and security of everyone on the aircraft,” she added, adding that “this should send a message to the public that these incidents are serious.”

The frequency of cases involving rowdy passengers has decreased, meantime, following the April repeal of the need for face masks on board. Nevertheless, the FAA has opened roughly 680 investigations into similar assaults this year, which is far more than typical.

The FAA is looking into this occurrence right now. A federal offence of interfering with flight attendants and crew members has been brought against the suspect, who is now being held in jail.