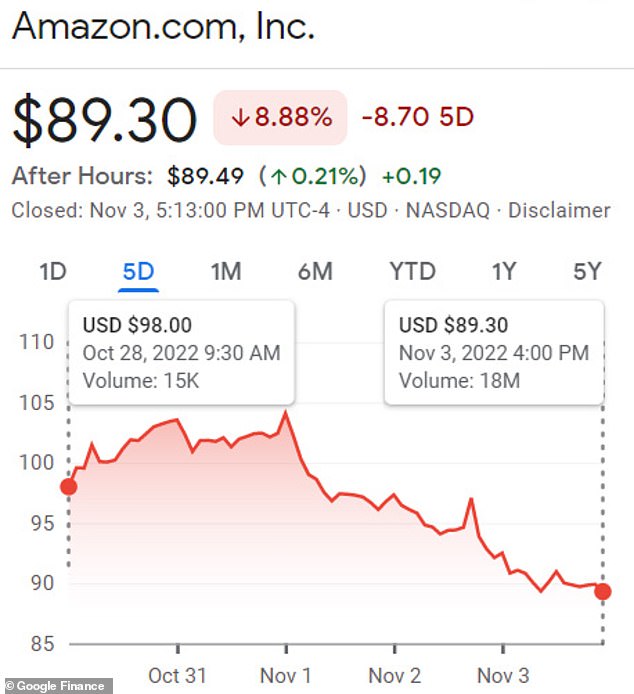 Amazon delivered a message to its staff on Thursday informing them that recruiting will be suspended for “the next few months.”

The company-wide hiring freeze will be implemented, and it will have an impact on key teams like Prime Video, Alexa, and Amazon Fresh.

According to Beth Galetti, senior vice president of people experience and technology at Amazon, “We’re experiencing an unusual macroeconomic climate, and want to balance our recruiting and investments with being attentive about this economy.”

Following last week’s release of disappointing fourth fiscal quarter results, Amazon’s worth fell below $1 trillion. Additionally, it disclosed that it anticipated poor income during the forthcoming Christmas season, a crucial one for the business.

In order to battle inflation, the Federal Reserve increased interest rates, which may be a sign that the US is headed for a recession. Therefore, a number of IT firms are getting ready for the next tough financial months.

Amazon is hardly the first business to implement dramatic cost-cutting measures in the wake of years of tremendous growth and earnings, which were aided in part by the epidemic.

The rise in delivery during Covid gave IT firms a lift, which they are currently experiencing difficulty with.

According to President Biden, the country is not experiencing record inflation and is not concerned about an impending recession.

However, Jeff Bezos, the founder of Amazon, has recognized the likelihood of a recession.

Bezos tweeted on October 17 that “the probabilities in this economy advise you to batten down the hatches” in reaction to Goldman Sachs CEO Solomon’s statement that there is a “good possibility of a recession.”

In an effort to become “leaner” in the face of mounting economic uncertainties, Lyft stated it will eliminate almost 700 positions.

John Zimmer and Logan Green, the company’s co-founders, informed the workers on Thursday that 13% of the personnel will be let off.

The firm previously reported recruiting was halted in May, then fully suspended, and 60 positions were lost in July. The reductions represent the most recent cost-cutting action.

Zimmer and Green informed colleagues in a message that was also obtained by the Wall Street Journal that “there are various difficulties playing out throughout the economy” before announcing the job layoffs.

We might enter a recession in the next year, and ridesharing insurance premiums are rising.

This summer, we made a lot of effort to reduce expenditures. To do so, we reduced spending, slowed down, then stopped recruiting, and put off less important projects.

Still, Lyft has to cut costs, which means we must let go of some amazing team members.

All of this has just happened as a result of Elon Musk buying Twitter. He wants to drastically reduce the staff in order to save money.

According to firm employees, 50 percent of the workers will be let go. Musk has also hinted in a series of private Tweets that he intends to launch a $8 monthly Twitter membership in order to increase income.

It was disclosed last month that Mark Zuckerberg intended to fire up to 12,000 underperforming Facebook employees after starting a review process in which managers were encouraged to identify employees who “need help,” according to sources.

During a Q&A session with staff, the Facebook CEO announced that the business will continue its May hiring freeze. He promised that cost-cutting measures will be implemented at that meeting.