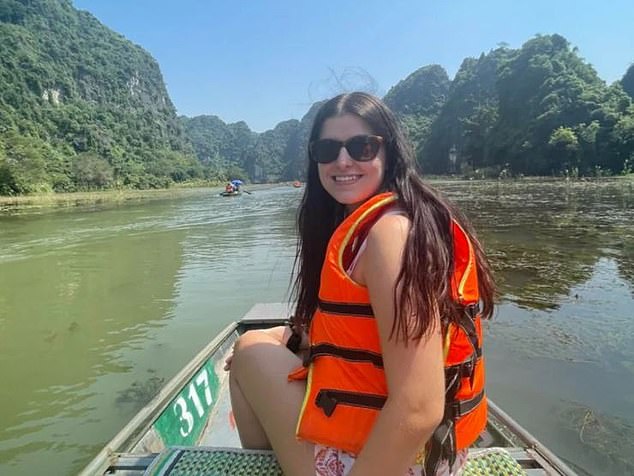 A woman with a severe nut allergy was ‘forced’ to sign a release releasing the airline from liability if she died while on board.

Abbie Tomlinson, age 26, went on Bamboo Airways from London Heathrow to Vietnam on October 9; she claims she “would never fly with” the carrier again.

The doctor stated in the waiver that she was required to accept that the plane would not make an emergency landing if she experienced anaphylactic shock.

She alleges that she told the flight crew of her allergy and ‘politely’ requested that peanuts not be served.

However, Dr. Tomlinson remembers the cabin crew ‘laughing in her face’ and claiming they told her ‘you cannot persuade people not to eat nuts’

“They refused to admit that I had an airborne severe nut allergy,” she wrote on Twitter.

Dr. Tomlinson reported that Heathrow personnel boarded flight QH24 to assist with the ‘linguistic barrier,’ but the crew continued to protest that nothing could be done.

She claims they advised her, “Just bring your EpiPen.”

The doctor then asserted, “I was forced to sign a handwritten document by the airline stating that if I suffer anaphylaxis on board, they will NOT do an emergency landing and that if I fly, I do so at my own risk and they are not accountable if I die on the flight.”

In her Twitter thread, Dr. Tomlinson also claimed that she was only allowed to fly because she claimed to be a physician. She continued, “In 2022, I should not be discriminated against because I was born with a medical condition.”

“An epipen will buy you 30 minutes, but you’ll still need hospital care after an anaphylactic reaction,”

Dr. Tomlinson also noted that “something needs to change” because “one individual on every flight” has an allergy.

The Newcastle doctor, who was traveling with her closest friend Anna, told The Independent, ‘I didn’t remove my Covid mask for the entire 14-hour flight and I didn’t eat on the plane.’

Because they were so useless, I will never fly with Bamboo Airlines again, and I’m also hesitant to fly out of Heathrow.

The doctor added that, although having previously encountered flight difficulties, this was the first time she had been “asked to sign something” stating that the plane would not make an emergency landing.

A representative for Bamboo Airways stated, ‘As a service provider, Bamboo Airways regrets that passenger Abbie Tomlinson’s experience on flight QH24 from Heathrow to Hanoi on October 9, 2022 was less than satisfactory.

“Upon receiving notification from passenger Abbie Tomlinson of her severe nut allergy, we reviewed our protocol and conferred with seasoned Heathrow airport partners,”

In reality, not only nuts themselves, but also cooking oil and sauces produced from nuts, etc., might be harmful.

In addition, because this was a 12-hour long-distance flight, we were required to supply meals to the passengers to ensure their health and privileges.

To protect her ultimate health, we suggested that Abbie Tomlinson reschedule her journey on a flight where meals were more carefully prepared.

The spokeswoman stated that Dr. Tomlinson wanted to fly, so “we handed her a waiver form, which is normally applicable for travelers with exceptional health requirements,” to sign.

How did Natasha Ednan-Laperouse die?

Natasha Ednan-Laperouse, age 15, died in 2016 due to a severe allergic reaction to sesame in a baguette from Pret.

The 15-year-old was aware that she was allergic to milk, eggs, banana, almonds, and sesame seeds, so she and her father, Nadim, carefully examined the product label.

However, the artichoke, olive, and tapenade baguette featured sesame seeds baked into the dough that were neither visible nor mentioned as an ingredient.

Within minutes of takeoff, she experienced anaphylactic shock aboard a British Airways aircraft to France.

On July 17, 2016, despite efforts to provide adrenaline shots, she was unable to breathe, suffered a heart attack, and died in a French hospital.

However, they were ineffective, and she experienced several cardiac arrests.

The airline asserted that the customer signed the agreement and that they “took exceptional care” of her and received no complaints or requests for medical treatment during the journey.

The spokesperson said, “We apologise that cultural and communication issues may have led passenger Abbie Tomlinson to believe that our employees treated her allergy note with disrespect.”

Natasha Ednan-Laperouse, age 15, passed away in 2016 after experiencing anaphylactic shock within minutes of takeoff on a British Airways flight from London Heathrow to Nice, France.

She had a serious allergic response to sesame in a baguette from Pret.

The 15-year-old was aware that she was allergic to milk, eggs, banana, almonds, and sesame seeds, so she and her father, Nadim, carefully examined the product label.

However, the artichoke, olive, and tapenade baguette featured sesame seeds baked into the dough that were neither visible nor mentioned as an ingredient.

On July 17, 2016, despite efforts to provide adrenaline shots, she was unable to breathe, suffered a heart attack, and died in a French hospital.

However, they were ineffective, and she experienced several cardiac arrests.

Since then, Natasha’s parents have advocated for airlines to crack down on nuts on planes to prevent future tragedies involving allergic passengers.

Poppy, a 14-year-old girl, suffered a life-threatening allergic reaction on a flight from Antigua to Gatwick in June after another passenger continued eating nuts despite being warned not to.

As a response to the news, Natasha’s parents stated, ‘Airplanes can be coffins for persons with severe allergies, as we know all too well. And there are far too many instances of passengers’ lives being placed in grave jeopardy during flights.

Simply put, if British Airways and other airlines are unable to enforce a ban on passengers eating nuts on airplanes, the law must be changed.