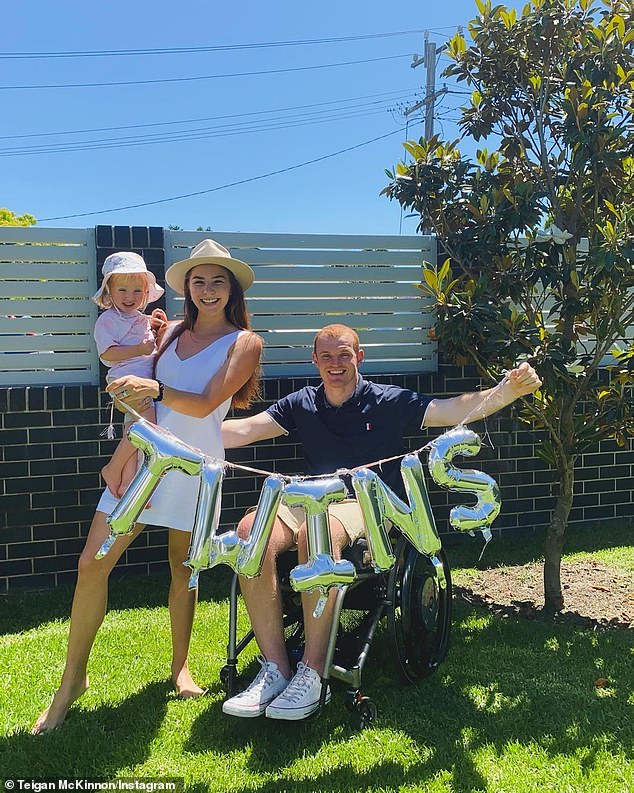 An emotional Teigan Power has spoken about her shock separation from high school sweetheart and former NRL player Alex McKinnon after five-years of marriage.

Ms Power confirmed the split with the 30-year-old former Newcastle Knights star via her Instagram on Sunday evening, asking for the pair’s privacy to be respected.

The couple, who share three children together, separated in January after 12 years together.

‘At this time, Alex and I are navigating this period of change together privately,’ Ms Power wrote.

‘Due to our situation being made public without our consent, we are asking for our privacy to please be respected at this time.

‘We are together concentrating on protecting our family and children. We have the utmost respect for each other, and are both very grateful for the people, as well as all of the support that we have in our lives!

‘We understand the interest, but would really appreciate your understanding and ask you to please respect our wishes at this time.’

Ms Power said the split is amicable and they are committed to co-parenting their children, twins Audrey Jill and Violet John, and eldest daughter Harriet.

On Saturday, she shared a photo showing the former couple celebrating their twin’s first birthday together.

Alex had proposed to his high school sweetheart from his hospital bed just days after his promising NRL career was cut short in March 2014, when he suffered a devastating spinal cord injury during a round-three match against Melbourne Storm.

He suffered fractures to his C4 and C5 vertebrae after a dangerous tackle close to half-time and was left a quadriplegic.

The couple tied the knot in an intimate ceremony in the NSW Hunter Valley in October 2017 and welcomed Harriet into the world one day before their first wedding anniversary the following year.

McKinnon had promised his bride that he would rise from his wheelchair when he popped the question, and he did just that at their wedding.

The day before the ceremony, Ms Power wrote to her followers on Instagram, ‘Tomorrow is the day we say ‘I do’ to the rest of our lives.’

The former Knight later reminisced about being able to leave his wheelchair during their stunning ceremony.

‘If we had to do that again I don’t know if I could do it, it was just everything just aligned on that day and it was perfect.

‘I used to always think I would want to go back and I would want my old life back, but I have moved on. I really have. I never thought I would be able to say that but life just so different now.

‘I understand in each experience you can learn something from it and I am very lucky and happy with the life that I have right now… I really have [found peace]. I feel really comfortable in myself and I know me.’

The couple announced they were expecting twins in November 2020 and said they were left speechless when their GP broke the news.

‘I’m still trying to get my head around all that stuff like two baby seats, two cots, two high chairs… it’s amazing how the rollercoaster of life works.

‘I’m an only child and so we always wanted a big family. I guess we’ve got our wish, that’s for sure.’

When the twins were born Teigan said it felt ‘so natural’ to welcome both of the girls into the world.

‘Alex took Violet in his arms and Audrey was placed on my chest,’ she said of the tender moment.

‘In that moment, as the twins cried for each other, it was extremely overwhelming.’

She went on to say how it was clear the twins were aware of their own special bond.

‘They both arrived crying, but in our first sign of how close they are as twins and little babies, they stopped crying as soon as we placed them together on my chest.’

Alex recently left his job at the Newcastle Knights, where he was the recruitment officer.

He is now studying at university and working for Fox Sports as a sideline reporter and analyst.