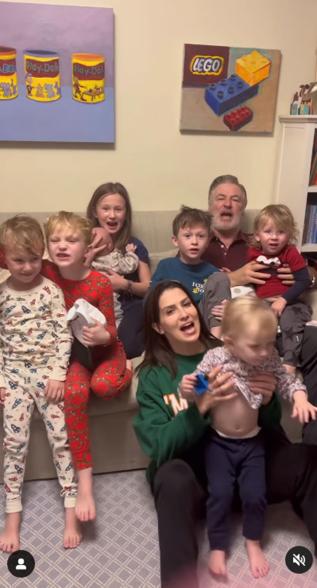 After Ireland Baldwin announced her pregnancy on Saturday, Hilaria Baldwin shared a video of her daughter Carmen informing her younger siblings of the news.

“You guys understand the meaning of uncle, right?” The nine-year-old inquired. It indicates that either your sister or brother is pregnant or has a child.

When Carmen pointed out that her father will soon become a grandfather, he covered his eyes in feigned dismay.

“From all these ecstatic little uncles and aunts, as well as grandpa Alec and grandma me… We are extremely pleased for you, Ireland and Andre,” Hilaria, 38, captioned the Monday family video.

“cannot wait to meet the newborn”

Ireland Baldwin, the eldest daughter of Alec, is expecting her first child.

Ireland, 27, remarked, “Thank you very much! The youngest uncles and aunts.”

Saturday, the model announced to her Instagram followers that she and her partner RAC are beginning a family by posting an image of an ultrasound.

Alec, 64, tweeted “Amazing” while cousin Hailey Baldwin remarked that she was “cryin.”

Alec has seven further children with his wife, Hilaria Baldwin.

In October 2022, Hilaria told Us Weekly that “only time will tell” if the couple will add to their large family.

The former yoga instructor revealed at the time, “I would have said previously [that I’m] conclusively done.” “Seven kids in, I feel like I am. But it’s just me and Alec.”