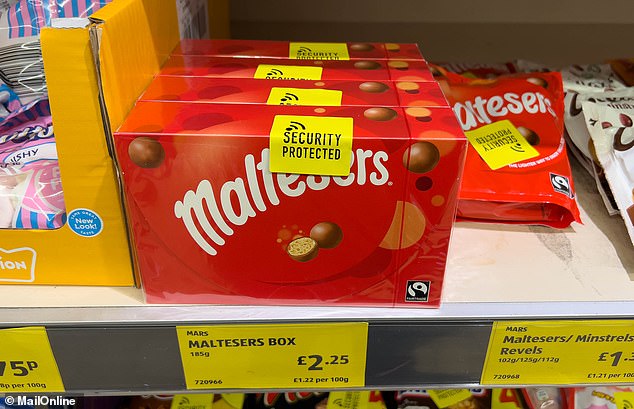 It has come to light that an Aldi store has placed security tags on sweets for as little as 85p in response to a national increase in stealing caused by the rising cost of living.

The Rushey Green store in Catford, south London, has placed yellow security stickers on a variety of its confectionery items, including an 85p Kinder Snack Bar, a £1 box of Haribo Tangfastics, and a £1.05 bundle of five Cadbury Twirls.

In recent months, a variety of grocery store staples, including infant formula, cheese, butter, and even milk, have been tagged with security stickers in response to price increases.

According to the Office of National Statistics, shoplifting surged 18 percent in the year leading up to the end of June compared to the preceding twelve-month period.

It has come to light that a London Aldi store has placed security tags on sweets for as little as 85p (pictured: a’security protected’ box of Maltesers in the Aldi store).

The Rushey Green store in Catford, south London, has placed yellow security stickers on a variety of its confectionery items, including an 85p Kinder Snack Bar, a £1 box of Haribo Tangfastics, and a £1.05 bundle of five Cadbury Twirls.

In July, Asda placed security tags on 1kg tubs of Lurpak as its price approached £10, while only last month, a Tesco shop in Cornwall attached tags to milk, despite the fact that this was a result of human error, according to Tesco.

Aldi informed MailOnline that the security stickers on the sweets in its Catford store were not part of a national policy, but rather a local solution to a local issue.

Consumer advocate Martyn James told the Telegraph that the labeling of low-cost foods was “very concerning.”

He continued, ‘It is a ridiculous overreaction to tag products of exceedingly low worth, and it gives the erroneous appearance that we are walking around stuffing our pockets.’

In recent months, there has been an uptick in theft because many are struggling to purchase food.

It is the humane approach for stores to issue warnings to shoplifters but avoid prosecution when it comes to prosecution.

In supermarkets, security tags are frequently applied to expensive or risky items, such as alcohol, razors, and even perfume.

The tags can only be removed once payment has been made and the box has been removed by a sales associate. If someone took an item with a security tag out of the store without paying, an alarm would sound.

During the summer of this year, supermarkets reported that the frequency of thefts had been “over the charts.”

A group reported to The Grocer that there has been an increase in ‘new first-time shoplifters’ compared to ‘the typical suspects.’

One store manager told a publication, “Recently, we prevented a senior citizen from stealing laundry detergent and shampoo.” The rising cost of living will force individuals to begin making decisions.

At Co-Op, brands of laundry detergent and infant formula, including Aptamil and Cow and Gate, have been placed in security cases.

A Co-Op representative previously told MailOnline that this is not a UK-wide policy and that the company has not witnessed an increase in thefts.

Last month, milk cartons in the Tesco Extra store in the Cornish village of Pool were fitted with unique plastic security tags.

According to CornwallLive, the store has seen a spate of milk thefts, particularly of four-pint jugs.

However, Tesco disputed that this was the basis for the tagging, stating CornwallLive that ‘human error’ was to blame.

Theft of dairy goods has increased by 18% during the summer compared to the previous 12 months, prompting supermarkets throughout the United Kingdom to crack down (Packs of butter with security tags earlier this year)

Shoppers were astonished to learn that one of Co-Manchester Op’s city-center stores now stores washing machine pills and detergent in security containers.

Tesco told MailOnline that it is not company policy to place security tags on fresh milk. Today, a very small quantity of milk was wrongly labeled at our Redruth Extra location, and these labels have been removed. We apologize for the inconvenience caused.

This month, the supermarket giant began utilizing security barriers to safeguard Tesco employees from customers waiting to steal discounted items with yellow stickers off their hands before they reach the shelves.

It comes at a time when the British are facing their most expensive Christmas in years due to inflation and rising prices.

The price of a fresh turkey is approximately 25 percent higher than it was a year ago, primarily due to increasing farm costs and the impact of avian flu.

Additionally, drivers face the most expensive trip back home for Christmas ever.

Currently, diesel costs over £97 per gallon, almost £15 more than it did a year ago.

This week, automotive experts accused merchants of “heartless overcharging” for failing to pass on large wholesale price reductions. Diesel has reached 176 pence per liter at the pump, 27 pence more than a year ago. Currently, gasoline costs approximately 153p, 7p more than in 2021.

This makes a full tank cost £84, a rise of £4 in a year. Despite wholesale prices falling back to the same levels as last year and fuel duty being reduced by 5p per litre in March, the cost of filling up has increased significantly.

RAC analysis indicates that gasoline should be 15 pence per litre cheaper. Simon Williams, a spokesman, stated, ‘With the cost of living issue making this one of the most difficult Christmases on record, it is all the more infuriating to see that motorists are being heartlessly overcharged for petrol, making this the most costly holiday vacation ever on the roads.

‘The major four supermarkets, which dominate fuel retailing, have failed to drastically reduce their forecourt pricing to reflect the large decrease in the price of wholesale petroleum they are experiencing.

Many smaller, independent businesses now sell their fuel for significantly cheaper than supermarkets, which is a peculiar circumstance.

To give drivers the Christmas gift they deserve, we ask shops to slash gas and diesel prices by a significant amount.

Because of the pandemonium on the railroads, millions of additional motorists are expected on the highways. On Friday and Saturday, around 34 million car trips are projected to be made. Diesel wholesale prices have decreased to 126 pence per litre, which is only 14 pence more expensive than last Christmas, and the RAC estimates that this should result in a 13 pence decrease at the pump.

»Aldi places security tags on 85p candies, Maltesers, and Haribo in response to the rising cost of living«