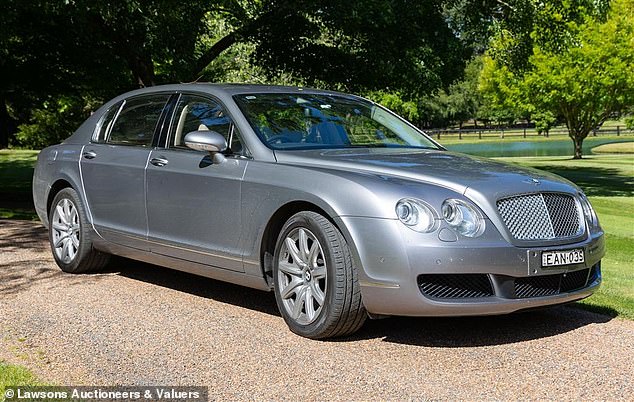 The 81-year-old veteran broadcaster, who recently underwent emergency spinal surgery, has recruited Lawsons Auctioneers to dispose of a vast assortment of belongings.

It follows the recent sale and settlement of his vast Fitzroy Falls property in the Southern Highlands of New South Wales, south-west of Sydney.

For more clever buyers, prices for items such as photographs begin as low as $20.

The stunning 2006 Bentley Continental Flying Spur belonging to Alan Jones will soon be sold at auction.

Alan Jones (shown) is selling hundreds of belongings from his former Fitzroy residence.

Additionally, the auctioneers have sold a Balinese daybed with plush cushions for as little as $800.

For fellow sports fanatics, there is an assortment of signed bats, shirts, and gloves from cricket legends such as Steve Waugh and the late Don Bradman.

In addition to horseracing memorabilia, there are photographs of Jones with notable Australians such as trainer Gai Waterhouse and late cricket legend Shane Warne.

A set of four leatherbound books containing the poetry of Charlotte Bronte is valued between $60 and $80 by bibliophiles, whilst a set of Australian encyclopaedias containing collector’s item editions could cost up to $200.

A signed, framed cricket bat by the late Sir Don Bradman may fetch as much as $300.

In a glass cabinet, the batting gloves used by former Test cricket captain Steve Waugh in the late 1990s might also bring up to $300.

Many things, like a Tiffany & Co crystal wine decanter, bear the initials AJ.

The Lawsons website promises that all online bids are executed promptly against the item’s reserve price or the current highest bid.

Please note that if competitive bidding occurs within five minutes of the end of the auction, the closing time is extended by an additional five minutes.

In honor of his mother, Jones purchased the Fitzroy Falls property known as Elizabeth Farm for $2.6 million in 2003; it was sold in November.

Originally listed for $17.5 million, it is thought that the property sold for closer to $16 million.

Alan Jones is selling off a multitude of belongings, including this Balinese daybed.

Need a secondhand pair of RM Williams boots? Alan Jones is selling his pair of shoes for between $150 and $250.

He will continue to reside in his East Circular Quay luxury condo overlooking Sydney Harbour.

Last month, Jones told The Daily Telegraph, “I only spent approximately 35 days a year in the Highlands previous to Covid, so I will be extremely happy in my flat.”

If my poverty condemns me to daily views of the Sydney Opera House, Harbour Bridge, and Sydney Harbour, there is no need to be depressed.

Jones disappeared from the airwaves recently after being transported to St. Vincent’s Hospital for spinal surgery.

Since October, the conservative political firebrand and former Australia Wallabies coach had not broadcast his daily shows and podcasts on Facebook and the ADH Network. He had been battling crippling back pain for years.

His spokesman, Jake Thrupp, recently told the Daily Mail Australia that Jones would take a summer holiday and return in 2023.

‘There’s no stopping him,’ he stated emphatically.

This statue of the late Sir Don Bradman may receive bids as high as $600.

I believe they were repairing something that had been botched the previous time. They have told him that he will be OK following this operation.

He has been using a cane for the past year. He hopes to be able to discard it after his most recent surgery, but we’ll see.

After a stellar career spanning decades at 2UE and 2GB, Jones retired from radio broadcasting in 2020 and temporarily joined Sky News Australia.

He departed the network in 2021 and later announced he would provide daily shows, updates, and podcasts online with Alan Jones Direct To The People.

Additionally, a variety of artworks from Jones’ collection will be sold at auction.