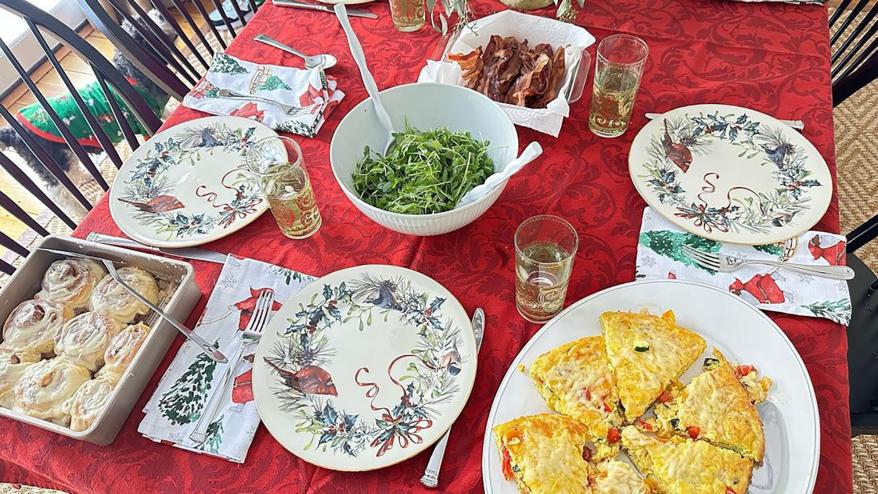 Al Roker is without a doubt in the holiday spirit.

The “Today” show meteorologist, who has lately been hospitalized, posted a family photo on Christmas Day.

In the photo, 68-year-old Roker, his 62-year-old wife Deborah Roberts, and their children Leila, 24, and Nick, 20, are seated at a table heaped with food.

Courtney, 35 years old, and her husband, Wesley Laga, were also included in the photo.

They were all dressed in matching, bright green pajamas adorned with Peanuts characters.

Pepper, the family’s rescue dog, was depicted in a second shot wearing a matching attire.

From our family to yours, #merrychristmas, he wrote in the photo’s caption.

After consecutive hospitalizations, the affable television personality returned to the “Today” show earlier this month.

Deborah Roberts and Roker have two children together.
Insagram/deborahrovertsabc

The meteorologist acknowledged to his co-anchors, “It’s been a tough slog.” It’s been the most difficult surgery I’ve ever had, and I’ve had several.

After losing muscular mass in the hospital, Roker remarked that he experienced a “certain amount of frailty.”

“Every day I engage in physical treatment and occupational therapy. I must simply regain my strength,” he added. “I feel good. I feel strong. Each day I feel slightly better.”

Roker justified his absence from the NBC morning show in November.

“I was admitted to the hospital last week with a blood clot in my leg that traveled to my lungs,” he posted on Instagram. After some medical whack-a-mole, I am fortunate to be receiving excellent medical care and on the mend.

Unfortunately, he was released from the hospital, only to be readmitted less than 24 hours later.

For the first time in 27 years, Roker was obliged to step down as co-host of the “Macy’s Thanksgiving Day Parade” due to bad health. He also missed the lighting of the Rockefeller Center Christmas tree.

Over the years, the daytime Emmy winner has dealt with more health difficulties, including carpal tunnel surgery and a hip replacement.

The TV host informed viewers of his prostate cancer diagnosis in November 2020, stating that the condition was “a touch aggressive” despite being detected “early.”