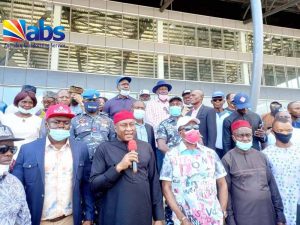 Chief Onyema, who gave the disclosure upon his landing at the Airport for the third time, described the project as a gateway into the South East region.

He disabused people of thinking and seeing the Airport as white elephant project, stressing that it received the fastest approval by the Federal Government, and applauded the Buhari administration for cooperating with Anambra State over the project, which he described as better than most airports in the Country.

Chief Onyema, who said that the Federal Government is pushing commercial activities into the South East, insisted that every facility in Aviation is already within the Airport, calling on people who have businesses outside the State to invest in the Anambra, adding that the Airport has the capacity to provide millions of jobs in the areas of travel agencies, hotels, resorts, among other business opportunities.

On his part, Governor Obiano, who asked God for the grace to complete the project in record time, said his major interest is to make Anambra an international destination, expressing optimism that he will exit office on a high note.

Government House Correspondent, Ejike Abana, reports that the Deputy Speaker of the State House of Assembly, Dr. Paschal Agbodike, was among those who were part of the visit to Governor Obiano.