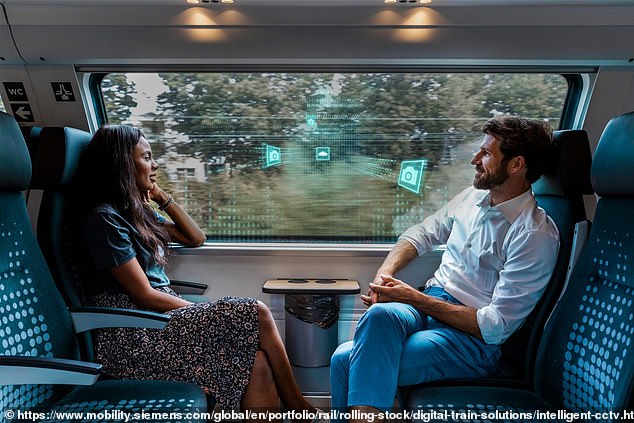 CCTV utilizing artificial intelligence will be able to spot sex pests and criminals onboard trains prior to an attack, and six rail operators have already been offered the equipment.

Siemens Mobility’s ‘iCCTV’ (intelligent CCTV) will be able to analyze passengers’ mannerisms and behavioral patterns to decide whether they pose a threat to others.

Real-time technology will analyze live footage to identify the level of threat, a step that has the potential to change public transportation safety.

Through an onboard announcement, the system can tell a suspect to retreat, inform them that they are being recorded, and warn them that police may approach.

CCTV utilizing artificial intelligence will be able to spot sex pests and violent criminals on trains before to an attack.

According to The Times, it is currently utilized by Eurostar and nine other companies.

The company is constructing new trains for the Piccadilly underground line in London, and the technology will be demonstrated in Berlin next month.

For instance, the AI will be able to differentiate between a group of intoxicated but harmless friends and those who could start a brawl.

It can analyze body language to determine whether a lady sitting alone feels scared by a man or is eager to converse with him.

The personnel will not be required to watch hours of tape, but will instead be notified of any possible incidents.

Conventional CCTV can only examine crimes after they have occurred, whereas the new iCCTV can monitor them as they occur.

Sambit Bannerjee, general director of rolling stock at Siemens Mobility, stated, ‘Our intelligent iCCTV system is capable of identifying potentially dangerous situations early on, such as when a person “squares up” to another.

It then sends an alert to the guard or person in the control centre, who can view live video from the train car and decide whether to make an announcement, intervene personally, or notify the authorities.

The revolutionary innovation arrives ahead of the holiday season, when alcohol-fueled disorder on trains increases.

It supplements conventional surveillance with an active analysis of video on board your whole fleet.

The results are processed in real time by advanced algorithms and made accessible to the crew, passengers, and wayside systems.

According to the Office of National Statistics, nine percent of adults feel “extremely or somewhat uncomfortable” when utilizing public transport alone.

This increases to 34% after sunset. 58% of women between the ages of 16 and 34 felt insecure utilizing public transportation alone after dark.