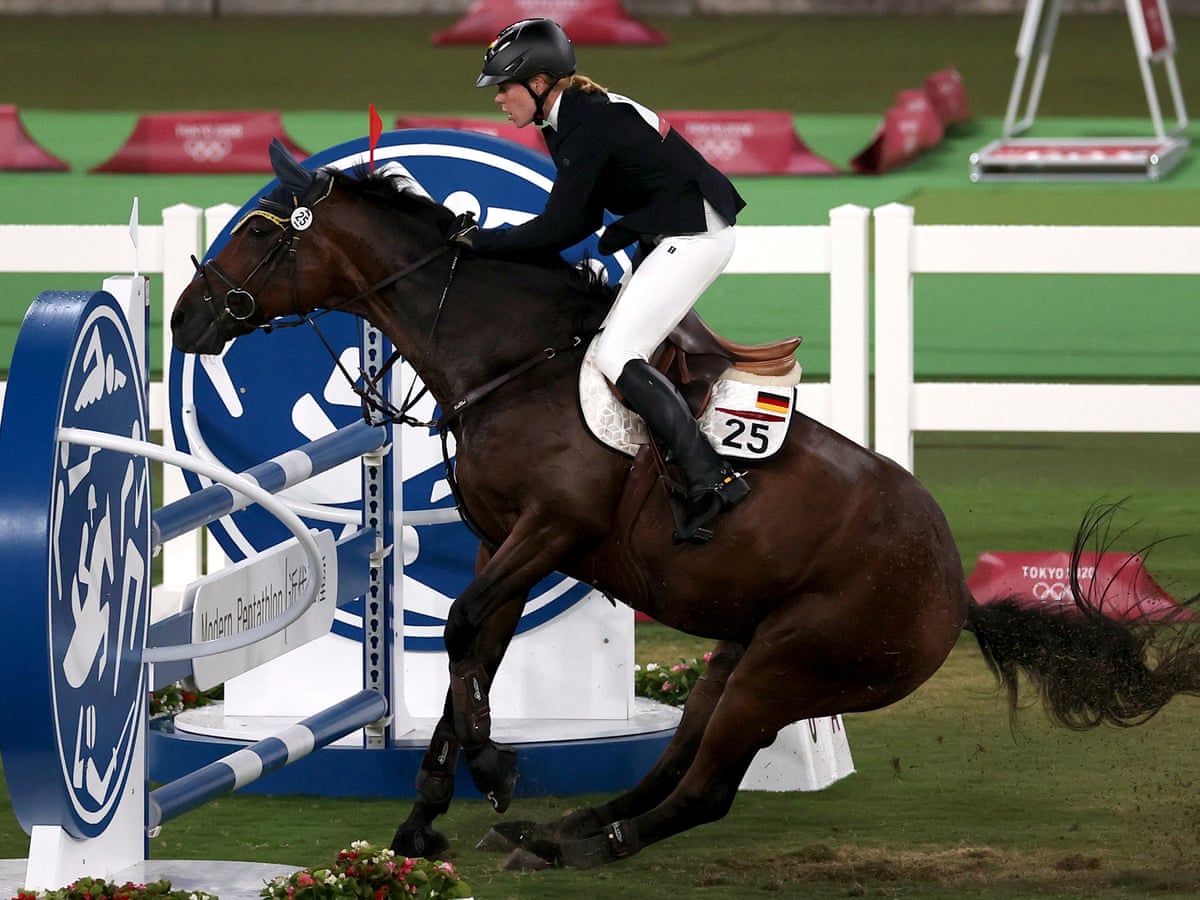 The pentathlon, which included running, long jump, discus, javelin, and wrestling, was once considered the climax of the ancient Olympic Games. Its winner was dubbed “Victor Ludo rum,” or “the winner of the games.”

Aristotle once said, “Pentathlon athletes are most lovely.”

When the sport was reintroduced into the modern Olympics in 1912 as modern pentathlon, it had a similar standing.

110 years later, the sport is far from its roots. It could lose its Olympic spot.

At last year’s Tokyo Olympics, a German coach smacked a horse that refused to jump during the equestrian segment.

Animal rights groups and fans around the world protested, and tales of animal welfare mistreatment in the sport quickly emerged.

Leaked IOC documents given to modern pentathlon’s governing organization, Union Internationale de Pentathlon Moderne, suggested the sport would be eliminated off the Los Angeles 2028 Olympic program if it didn’t drop show jumping as one of its five disciplines.

The IOC has denied giving UIPM an ultimatum, but a source told Insider it would view a show jumping Olympic bid “unfavorably.”

UIPM listened and announced show jumping would be removed after the 2024 Paris Olympics.

Skateboarding, sport climbing, and surfing are part of an IOC “youth” program.

The IOC warned UIPM that it must propose a new fifth discipline in its 2022 application to save its Olympic spot for LA.

After the decision to stop show jumping, 600 people signed a no-confidence resolution against UIPM’s leadership.

The outcry escalated after it was announced obstacle course racing would replace show jumping.

On the same day that UIPM revealed the proposed new fifth discipline, a group of elite modern pentathletes called for an independent investigation of the “heavy-handed and unconstitutional method” in which UIPM removed the equestrian discipline.

No investigation was conducted, but the organisation and its members continue to advocate for show jumping and oppose its replacement.

Some, like Olympic winner Joseph Choong, emphasize the sport’s history.

“I don’t know how anything else can fit into modern pentathlon’s DNA,” Choong said. “We’re not a pick-and-mix sport where you combine five sports. We have a proud Olympic past. It’s insulting to say that so quickly.”

Others, like Australia’s Marina Carrier, who placed third in women’s show jumping in Tokyo, are upset that an element of the sport they love is disappearing.

Carrier told Insider, “I love riding.” “Working with horses has made me a better person and athlete.

“Personally, I oppose the change. Future pentathletes should be able to work with such magnificent creatures.”

But more than anything, a big chunk of Pentathlon United’s members — including Choong and Carrier — are outraged at the process that got to this point. They bemoan that they had little say in the future development of their own sport.

The decision to pick obstacle course racing as modern pentathlon’s fifth discipline was reached by a “working group” of 21 people.

Four of those members were Olympic pentathletes, including Great Britain’s James Cooke, the men’s 2018 World and 2019 European champion. Four were “external marketing and media specialists,” including Michael Payne and David Hill. UIPM officials, including President Klaus Schormann, made comprised the rest of the group.

Choong was startled by how little athletes matter in sport decision-making. “Most active athletes don’t want these changes, but they’ve been forced through.”

Respondents might chose obstacle racing, ninja-style racing, equestrian as is, equestrian with reformed rules, no opinion, or other. 213 persons from 40 nationalities answered; 66% are pentathletes.

Choong claims the decision to replace show jumping with obstacle course racing was taken months ago behind closed doors. He will quit the sport if the change occurs.

“Only a comprehensive UIPM governance and board member overhaul will make me stay,” he stated. “I won’t compete for such a corrupt organization.”

Heidi Hendrick and Avery Niemann told Insider they are also disappointed they weren’t included in the decision-making process and will depart if show jumping is permanently eliminated.

“Modern pentathlon is swimming, running, fencing, equestrian, and shooting,” Hendricks remarked. “To say ‘now it’s gone and you have no say’ is upsetting.”

Niemann: “[UIPM] claimed athletes would be the main voice, but that hasn’t happened.

“If there had been a fair process, we’d be more prepared to accept it, but that hasn’t happened.”

Cooke, one of four Olympic pentathletes in the fifth-discipline working committee, disputes contemporary pentathletes’ accusations that they were left out.

UIPM’s initial decision to remove show jumping surprised practically everyone in the sport, including himself. When it came to choosing a new discipline, UIPM and its fifth-discipline working group asked for feedback from the sport’s committees and national federations.

“Everyone’s proposals were heard,” he stated. “Every country federation, 131 of them, was permitted to speak and make ideas.

“The referees, judges, coaching committee, and athlete committee were all able to make ideas.

“The fifth-discipline working group spoke with athlete representatives from each nations and asked them to speak with their athletes. We then formed a demographically diverse athlete focus group.

“In the focus group, we had riders and riders-against.

“We did a great job with this process,” he said.

When the IOC urged the UIPM to cut show jumping, it emphasized athletes must be involved in choosing a substitute.

“There’s the elected athlete commission voice and other athletes, who may or may not have the same perspective,” McConnell said in September.

“So, again, we’re looking forward to the UIPM representing the athlete voice in their study of the fifth discipline, finishing the recommendation, and in their submissions to us, and we’ll consider that athlete opinion.”

Pentathlon United may represent many outstanding pentathletes, but it’s not everyone’s voice.

Elite pentathletes are glad for the adjustment and believe it will help safeguard the sport’s Olympic future.

“We’re a burgeoning Olympic sport,” he told Insider. “This scenario is created by our low ticket sales, viewership, and participation ratings. We must choose and change.”

According to Jörg Krieger’s 2022 book “Athletes Pressing Charges: Fighting for the Future of Modern Pentathlon,” global participation is low.

“Due to the sport’s intricate framework, participation and public interest are low,” noted Krieger, an Aarhus University sport and social science assistant professor.

“The cost of training for five individual sports, plus the equipment needed for fencing or horseback riding, limits the pool of potential participants”

Modern pentathlon, which includes equestrian, has the most expensive entry-level equipment and infrastructure of any Olympic sport, according to Quartz. Without equestrian equipment and facilities, the cost is $3,170.

“We want to present a fast, dynamic, and cost-effective sport to boost modern pentathlon participation.”

Many former UIPM officials are also in support of the change.

“It’s a great challenge, but we must look ahead.

“Our goal is the Olympics. I’m confident this was the finest option for replacing riding.”

“If we want to remain an Olympic sport, we must engage all continents or countries,” said Vice President Bouzou, a four-time Olympic pentathlete for France.

“Obstacle course racing is accessible, cheap, and easy to organize,” he said.

“Costly. True, despite what some say. True. In Africa, how? In Asia? It’s everywhere.”

Since UIPM cut show jumping from modern pentathlon, the IOC has utilized “young.”

UIPM has hosted three obstacle course racing test events, the most recent of which was in Italy at the U-17 and U-19 Modern Pentathlon World Championships. Young athletes from Egypt, Brazil, France, England, China, and Ukraine tried the course with training from obstacle racing professionals. Local youngsters also tested the course.

Many participants loved it.

Young Hungarian athlete: “It’s great.” Englishman: “It was a first for me. It’s beneficial for the sport’s future.”

UIPM shared good feedback from dozens of young athletes at the test event.

The test event impressed the young athletes’ coaches, too.

Lithuanian coach: “It’s intriguing for spectators, for me.” I think obstacle course racing might help modern pentathlon get into the Olympics and boost its appeal.

U-19 coach Iain Aberdeen told Insider: “The athletes love it.

Fun, difficult. Some are incredibly good at it and some find it tough, but as with any sport, they’ll become better with practice.

“The shift is substantial, but we can practice with enough time. We can perfect the techniques and teach the next generation.”

UIPM has staged test events in Turkey, the Philippines, and Italy.

Pentathlon United’s objective to keep show jumping in modern pentathlon is not youth-focused.

The document contained few references to how the suggested changes would aid younger athletes and increase the sport’s accessibility. Instead, it focused on how it would benefit current competitors, the general quality of show jumping, and the animals themselves.

Document examples: “Athletes with minimal riding experience could reach a World Cup final or the Olympics. This is unacceptable and dangerous for horse and rider.”

“How will they run sub-6-minute miles, shoot, and fence in six years?

Never. Kids won’t be Olympians unless we become ninjas.”

Many wouldn’t accept a drastic alteration to a sport they’ve devoted their life and money to.

But the group’s ideas don’t match those of the IOC, which will decide modern pentathlon’s inclusion in LA.

“I get athletes saying, “This is my sport.” Next generation deserves fairness. If you’re a parent with a successful profession, you want the same for your children so they can achieve their dreams.

“We’re doing it. Some wish to maintain the sport unchanged. Then we’re out [of the Olympics].

“If a doctor gives you a pill to take to live 10 more years, would you? Denying means death. Choose. Do you wish to die or help future generations?

“We prioritize future generations. Youth hold our future in business, culture, and everything else.”

Changing with the times could save modern pentathlon’s status at the Olympics.

»After the horse-punching affair, modern pentathlon has triggered a generational civil war«