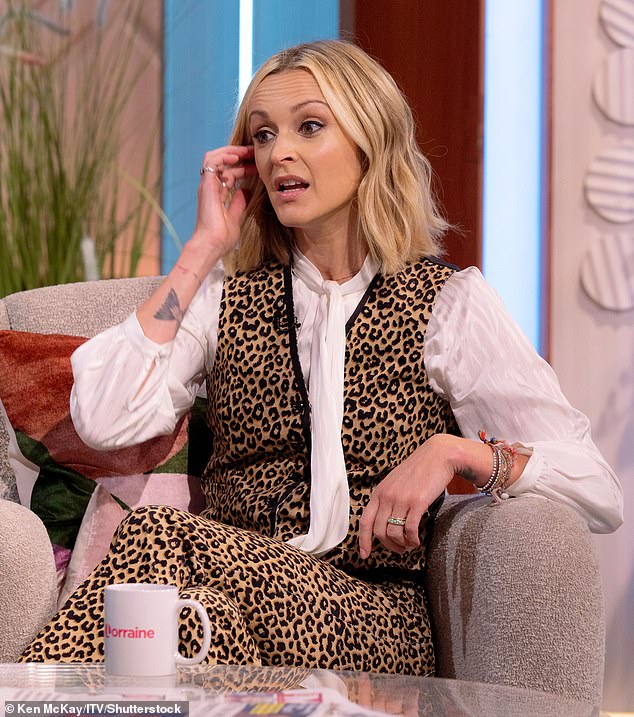 Fearne Cotton, a presenter, claims that when she approached the proprietor of a scaffolding company after receiving sexist and abusive remarks in public, a “inner wrath took hold.”

The former Radio 1 DJ alleges that corporate workers started harassing her when she and her husband Jesse Wood were out for a stroll.

The 41-year-old Miss Cotton said that she retaliated against the males before writing down the business’ name and then contacted the owner in Benidorm, Spain.

She also said that she had once spent a considerable amount of time being “terrified” to walk by herself.

She remarked on her Happy Place podcast, “I don’t in any way want to exaggerate stereotypes that may or may not exist, but I went by a group of scaffolders and — I was with my husband astonishingly — but there was some abuse screamed at me.”

You cannot speak to me like that, I kind of stepped back and said as a result of some internal wrath taking control. And it persisted. They continued.

Then my husband started to become involved, and we started to wonder what was going on. Then they denied it and lied by saying, “Oh, no, there are other employees; they are round the back of the home.”

And this rage inside of me, which I believe was probably cumulative, she continued, They yelled things after I left since I had definitely called them out. This part was cursing and yelling nasty things; it wasn’t necessarily sexual, but it had been.

I couldn’t go home and feel okay with what had just transpired, so I went back again.

Miss Cotton, who is married to Wood, 46, and the mother to Rex, 9, and Honey, 7, said she jotted down the name of the business from their sweaters, looked it up on Google, and called the boss, with whom she had a “very wonderful talk.”

He was in Benidorm on vacation and was angry that this was really happening, she added.

“I was simply taking deep breaths while I sat at home furious.” I was aware that it extended beyond that particular occurrence and that we have all been dealing with this issue for a very long time.

The culprit then called her and said: “We had a conversation, and everything was really okay.”

And then we kind of concluded it with me saying, “I’m a person, just out for a stroll with my spouse.”

She expressed her sincere hope that he would never again cause women to feel “scared, p***** off or furious.”

In an interview with Emily Atack conducted in advance of her BBC2 documentary Asking For It?, in which she discusses the abuse she gets from males online, the presenter remembered the experience.

While on live at BBC Radio One, Miss Cotton said that some of the insults she would hear left her feeling “terrified.”

Some of them, she said, “terrified me and weren’t so much sexual as violent, hostile.”

“The paranoia I had at that time in my life would have me continually glancing over my shoulder as I walked the streets.”

»After scaffolders harassed her, Fearne Cotton addressed the owner«