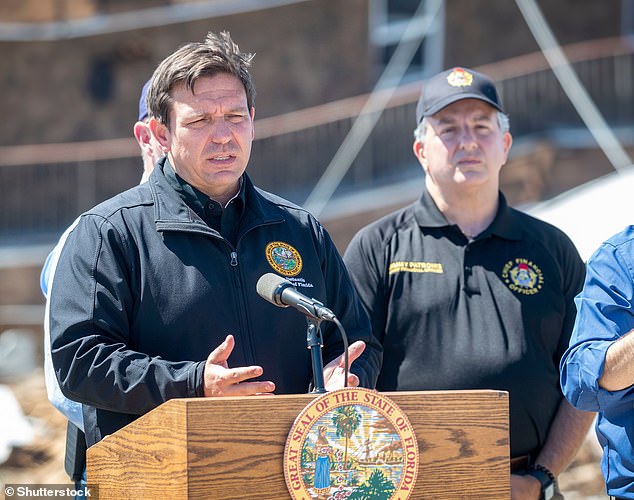 In the wake of hurricanes Fiona and Ian, which both struck within the previous ten days, President Joe Biden has committed to visit Puerto Rico and Florida next week.

Biden will travel to Puerto Rico on Monday, followed by Florida on Wednesday.

Biden had previously stated that he planned to visit both places in order to reassure locals that the federal government will assist in recovery efforts, but the White House has not yet revealed detailed details regarding the visit.

Biden will meet with Florida Governor Ron DeSantis in what will be their first meeting since they spat over transgender rights, abortion, and immigration – all of which are anticipated to be major themes in the next midterm elections.

The pair has been able to avoid political attacks during the past week.

When asked by a reporter about Biden’s relationship with DeSantis, he provided an overwhelmingly glowing response.

On Monday, President Biden and the first lady will go to Puerto Rico to assess the damage caused by Hurricane Fiona. Saturday evening, the president is depicted in a photograph.

This has nothing to do with political differences between us. This pertains to saving lives, homes, and companies.

In recent days, DeSantis has likewise toned down his rhetoric.

Previously, he had referred to federal storm aid as a “boondoggle” and said that it was administered with a “credit card mindset.”

However, in the state’s hour of need last week, DeSantis called out to the federal government for assistance.

The governor stated, “You know, when people are fighting for their lives, when their entire livelihood is at stake, when they’ve lost everything — if you can’t set politics aside for that, then you just won’t be able to.”

As of Saturday night, 77 people had perished as a result of Hurricane Ian, which flooded villages across the state, took out power, and compelled residents into shelters.

Biden will meet with Florida Governor Ron DeSantis, shown on Friday, in what will be their first meeting since battling over transgender rights, abortion, and immigration – all of which are anticipated to be major concerns in November’s midterm elections.

On October 1, 2022, Florida Governor Ron DeSantis posts a photo with the comment, “Today, I met with Marta, whose home was damaged and who was rescued by one of our high-water vehicles.” The state is ravaged by #HurricaneIan flooding, but our people are resilient.’

I was back in Lee County today working with local politicians and volunteers to get Floridians back on their feet, tweeted Florida Governor Ron DeSantis. Stay resilient – we will survive this!

WaffleHouse is one of the first businesses in Charlotte County to reopen and provide hot meals as we work together to serve Floridians affected by #HurricaneIan, tweeted Florida Governor Ron DeSantis. Thank you for feeding the linemen who are laboring to restore power.

DeSantis was photographed in Lee County, home to Fort Myers and the core of the hurricane’s destruction on Florida’s Gulf Coast, where 35 people perished because county officials issued evacuation orders one day later than other adjacent jurisdictions.

In Lee County, home to Fort Myers and the focus of the hurricane’s destruction on Florida’s Gulf Coast, 35 people died because county officials issued evacuation orders one day later than other adjacent towns.

Other fatalities were recorded in the counties of Charlotte, Volusia, Sarasota, Lake, Collier, and Manatee.

The majority of fatalities reported in Florida were the result of drowning, although some perished due to various sad aftereffects of the hurricane.

Authorities report that an elderly couple died after their oxygen devices cut off when the electricity went off.

Biden stated that the storm could become “Florida’s deadliest hurricane in history.”

During his visit to Florida, Biden will reportedly meet with Republican Governor Ron DeSantis.

This aerial photograph shows damaged residences and debris in Fort Myers as a result of Hurricane Ian.

Biden and DeSantis spoke before the hurricane made landfall and again on Thursday morning as the devastation became apparent.

Ian was one of the strongest storms to ever make landfall in the United States.

The hurricane flooded coastal residences in Florida, wrecked a historic waterfront pier, and knocked out power to 2.67 million homes and businesses.

Biden stated that DeSantis, with whom he has had political disagreements, was “very satisfied” with the government reaction. The president stated that this issue has nothing to do with political issues. It is a matter of saving lives, homes, and companies.’

Jake Moses, 19, and Heather Jones, 18, both of Fort Myers, investigate a stretch of demolished businesses at Fort Myers Beach as a result of Hurricane Ian.

Biden stated that he had also spoken with a number of Florida mayors and conveyed the same message regarding the federal government’s commitment to assisting with the cleanup and reconstruction: “We are present.”

Biden stated, “We will do everything in our power to supply them with anything they require” and instructed them to contact him directly at the White House with their demands. They understand how to do that.

Biden also addressed the people of Puerto Rico, who are cleaning up and attempting to rebuild following Hurricane Fiona’s destruction of the U.S. island territory before Hurricane Ian struck Florida on Wednesday.

He stated, “I am devoted to you and the recovery of the island.” We have not departed.

Preliminary assessments indicate that 50 percent of transmission lines and distribution feeders in Puerto Rico were destroyed by Hurricane Fiona, leaving hundreds of thousands without power or water service nearly two weeks after the storm made landfall.

In this aerial photograph of Fort Myers, Florida, damaged boats and debris are stacked along the shore in the wake of Hurricane Ian.

The situation has enraged and frustrated many who were already plagued by power disruptions attributed to Hurricane Maria, a Category 4 storm that destroyed the island’s electrical grid in September 2017.

On September 18, Hurricane Fiona blasted into the southwest portion of Puerto Rico as a Category 1 storm.

Rep. Mariana Nogales of Puerto Rico stated, “We live in an eternal condition of fragility.”

Luma, a private firm that oversees power transmission and distribution in Puerto Rico, had predicted that electricity would be restored to 90% of customers by Friday in areas that were not seriously hit by the storm. Officials estimate that they could restore power to 90% of customers in hard-hit areas by Thursday.

Officials have not said when the entire island may be powered up.

Hundreds of schools and businesses, including grocery stores and gas stations, have been unable to open temporarily due to the ongoing power outage.

The Puerto Rico-based research group Center for a New Economy stated last week that Puerto Rico was already severely susceptible prior to Hurricane Fiona because only 30 percent of permanent restoration work due to Hurricane Maria in 2017 had begun.

The center stated that essentially nothing had been done to enhance the power grid and other vital facilities or increase their resilience.

The devastation inflicted by Hurricane Fiona will undoubtedly add another element of difficulty to an already arduous and complicated endeavor.

»After Hurricane Ian, Biden will visit Florida and Puerto Rico to meet with Governor DeSantis«