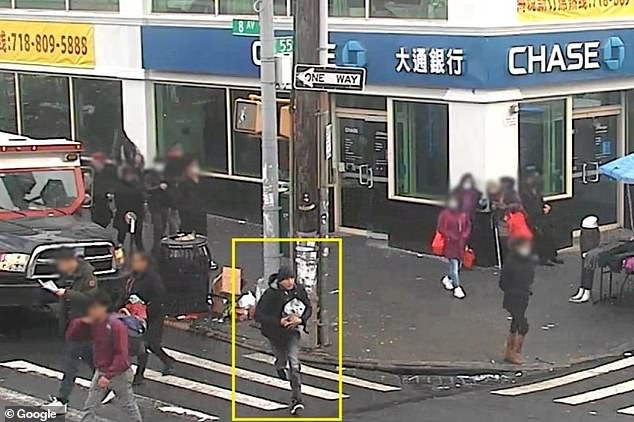 During a bank money drop in Brooklyn, three sly burglars stole $300,000 in cash from a Brink’s car.

Around 1 pm, the three thieves took advantage of the opportunity and grabbed the sizable amount of cash from the armored vehicle that was in front of a Chase Bank in Sunset Park, Brooklyn.

One of the thieves took a bag that had been left unguarded on the truck’s bumper while the other two allegedly started talking to a Brink’s employee to divert them and ask for instructions.

Police said that he then left 5423 Eighth Ave on foot.

Police are currently looking for the trio, including the one who took the money (yellow circled) and fled while the other two distracted the driver.

Police are looking for the guys involved in the January 6 crime, particularly the one who fled with the bag and was captured on CCTV.

A pale complexion and small build were reported for the man who took the bag off. He was dressed in gray slacks, a black hooded jacket, a black winter hat, and black sneakers.

The two individuals who diverted the worker were both of medium build and complexion.

According to the NYPD, “another unidentified man immediately retrieved a bag that was left unattended on the bumper of the armored Brink’s vehicle and departed the scene on foot while the employee was preoccupied.”

They merely talked to him while distracting him. It was an offense of convenience. Someone noticed a chance.

In a statement, Brink’s said: “We can confirm that a Brink’s crew was involved in an incident in Brooklyn on Friday, and we are cooperating with law enforcement.”

We don’t have any more information to share at this time.

»After diverting the Brink’s truck driver, a con artist trio steals $300,000 in cash in Brooklyn«