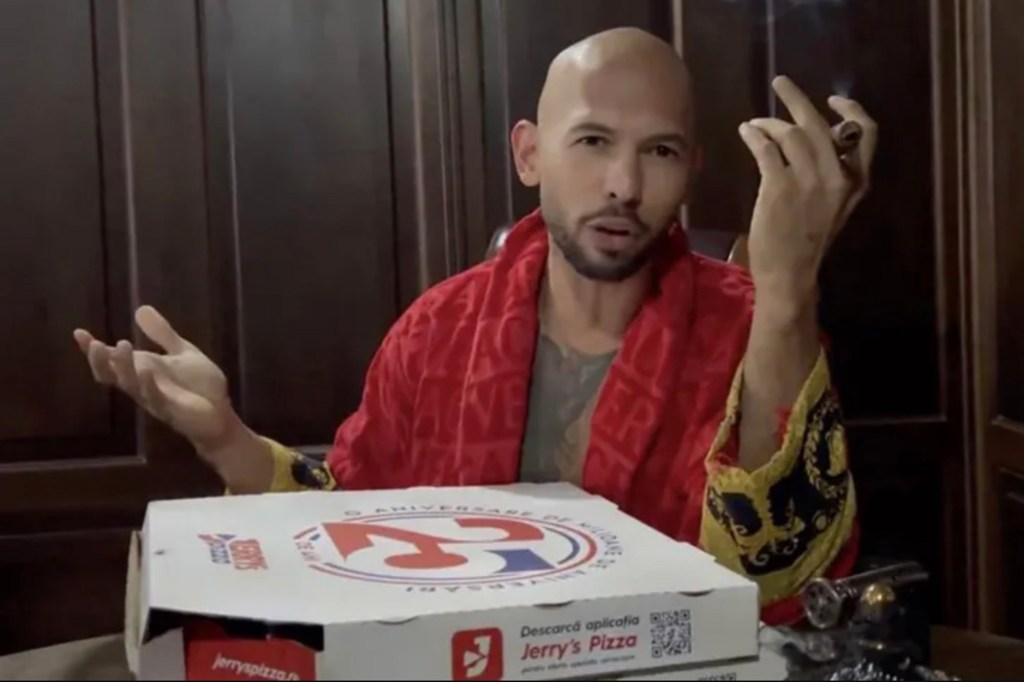 The arrest of controversial influencer Andrew Tate on Thursday has garnered a tiny Romanian pizza company a legion of new followers, who hurried to leave funny 5-star internet reviews of their love for the firm.

Tate, 36, and Tristan, his brother, were arrested at his property in a suburb of the Romanian capital city of Bucharest on rape and kidnapping accusations.

The arrest of the siblings occurred shortly after Tate released a video online mocking climate activist Greta Thunberg after the two engaged in a heated Twitter exchange about automobile pollution earlier this week.

In the video, Andrew Tate is given two pizza boxes from Jerry’s Pizza, a local restaurant in Romania, and tells someone off camera, “Make sure these boxes are not discarded.”

Within hours, hundreds of glowing reviews flooded the Google page for Jerry’s Pizza.

“Pizza so delicious you’d incriminate yourself for eating it,” remarked one internet wit.

“The pizza is so distinctive that people can identify its country of origin. Andrew Tate discovered this the hard way,” gushed a second critic.

A third individual remarked, “I had the ‘Tiny Mushroom Special with Extra Cheese’.” The case for pizza is open and shut. Possibly better when served cold. Prices are criminal.”

As word of Tate’s arrest began to ricochet throughout the mainstream media, an increasing number of amateur comedians went to Jerry’s Pizza’s Facebook page to mock the suffering of the famed self-proclaimed misogynist.

“The pizza is so delicious, you receive a free officer with every order!” wrote another.

One of the evaluations concluded, “Pizza well worth the time. Please request the Karma special.”

Friday morning, the owners of Jerry’s Pizza tweeted a photo of one of their now-famous pizza boxes with the comment “the reason we are the most desired pizza.”

Tate, 36, and Tristan, his brother, were arrested in Romania in connection with an investigation into human trafficking.
REUTERS

Thunberg’s tweet, “This is what happens when you don’t recycle your pizza boxes,” was likely the best response to Tate’s arrest.

Tate, a dual British-American citizen born in Chicago and residing in Romania for the past five years, is accused of being a member of a human trafficking ring that recruited six women who were subjected to “acts of physical and mental coercion,” sexually exploited, and forced to perform in pornographic videos, according to the Romanian law enforcement agency DIICOT.

Authorities stated that they arrested two British nationals and two Romanians in connection with the investigation into organized crime.

Photos published by Romanian news agencies showed Andrew being brought away in handcuffs, despite the fact that the DIICOT statement did not name the Tate brothers.

The four suspects were arrested for twenty-four hours, allowing Romanian law officials to search five residences and confiscate material, including weapons, related to the investigation.

The former kickboxer, born Emory Andrew Tate III, was only reinstated on Twitter last month after being banned for stating that raped women should “carry responsibility.”

Tate engaged in a verbal battle with the 19-year-old Thunberg earlier this week when he tagged her in a post criticizing his 33 cars and requesting her email address so he could inform her of his vehicles’ “enormous pollution.”

Wednesday, Thunberg answered with a vicious clapback, tweeting to Tate, “Yes, please enlighten me. email me at smalldickenergy@getalife.com.”

As of Friday, more than 248 million people had viewed the video of the eco-activist being brutally burned.

Tate’s next step was to distribute the video including the infamous, regionally-specific pizza box, which finally led to his incarceration.

Tate and his brother were questioned about the claims of human trafficking in April but freed without charges.