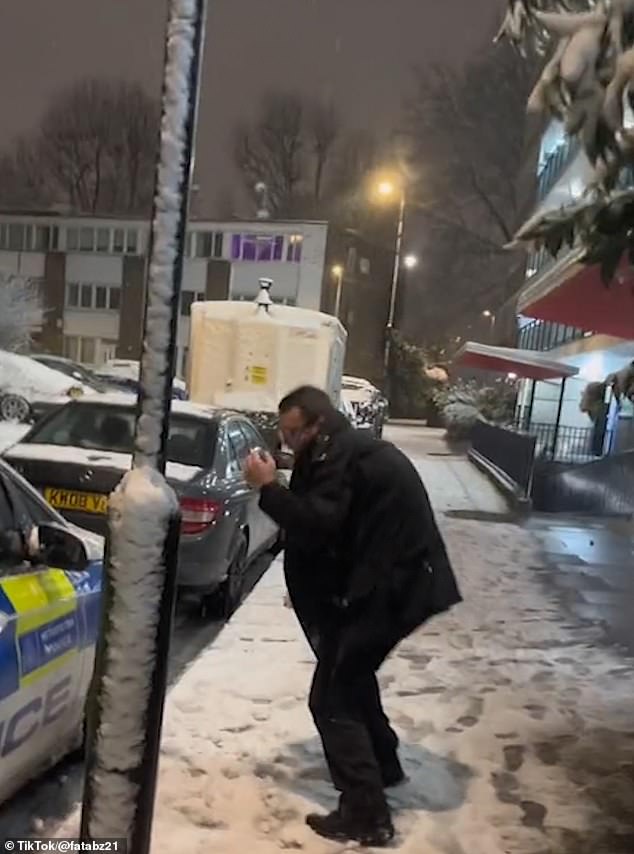 After six inches of snow fell in London, officers from the Met Police engaged in a fun snowball war with locals.

An internet prankster captured himself on camera on Sunday night, outside a building of apartments, throwing snowballs at a police officer as the cop was making his own snowballs.

Commenters praised Abdur Siza’s TikTok for demonstrating a close relationship between the neighborhood police and their community.

In the footage, one cop can be seen grinning as another freezing snowball is thrown at him, this time crumbling over his neck and down his back. Abdur can be heard laughing and saying, “I’m sorry man, I love you.”

Despite the bitter cold, which has caused travel mayhem and hundreds of schools to close, they were in excellent spirits.

Before the video transitions to images of Abdur hurling snowballs at two cops, the two exchange a fist bump.

The police can be seen in the video hurling snowballs across the street from their parked cruiser towards an unidentified target.

The video closes with an officer making another snowball by scraping snow off the top of his parked police cruiser.

The video got excellent feedback in the comments, with many people expressing their appreciation for the cordial exchange.

DiamondRoPlayz, a TikTok user, wrote: “W Feds, other Feds would swiftly and aggressively arrest you.”

In contrast, Charlie Willett said, “Some coppers are mint pity they ain’t all like that.”

Given that Christmas is quickly approaching, user Scott said that it was “great to see folks enjoying a laugh” with police officers.

This is what you call community policing, one critic added. That is how you maintain the public’s favorable perception of the police!

Another person commented: “It’s good to see police engaging with the public. It’s always ideal to establish a connection with your local community so people can trust them and come forward!”