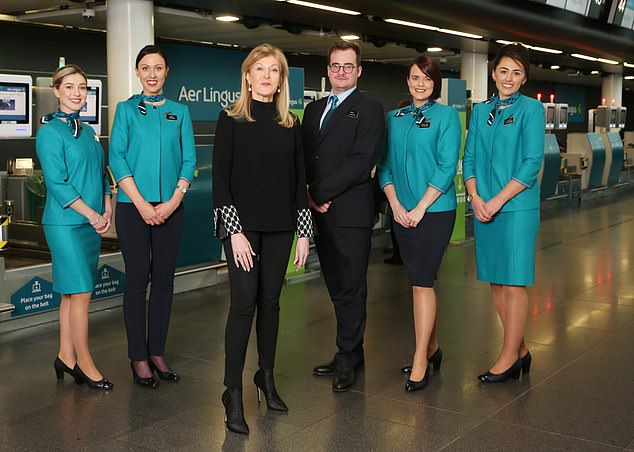 A court dismissed the discrimination petition of an Aer Lingus cabin service manager who stated that the airline’s new uniform perpetuated a “trolley-dolly” image of female cabin personnel.

Elizabeth Barry, a longtime employee of the airline, asserted that the sexualisation of the female Aer Lingus uniform is “inappropriate and humiliating in a professional setting.”

Ms. Barry told an Irish tribunal that her professional obligations were degraded since the new clothing “projects an outmoded and sexualized picture of women.”

Aer Lingus, however, dismissed Ms. Barry’s claim of discrimination and supported the new uniform, which was launched in February 2020 and designed by one of Ireland’s most renowned fashion designers, Louise Kennedy.

A cabin service manager for Aer Lingus asserted that the airline’s new uniform maintains the “trolley-dolly” stereotype of female cabin employees. Pictured: flight attendants modeling the uniform for its 2020 debut.

In his conclusions, Workplace Relations Commission (WRC) arbitrator Jim Dolan determined that Ms. Barry was not subjected to discrimination on the basis of her gender due to the uniform, and that her complaint was unfounded.

As part of her argument, Ms. Barry asserted that female cabin crew shirts or blouses are constructed with three holes over the left breast area.

This exposes skin just above the left breast, according to Ms. Barry, and “it is humiliating and demeaning for Aer Lingus to enforce an appearance code that reinforces sexist and sexual stereotypes of lack of seriousness and ineffectiveness in a workplace that is equally physically demanding for men and women.”

Ms. Barry further argued that the less practical appearance and functions of the women’s outfit “put them in an inferior position to their male counterparts, who appear more adept and professional than female cabin staff”

Ms. Barry was defended by attorney Leanora Frawley, who stated that female crew members must wear high heels when in uniform and outside the aircraft, unless they have a note of medical exemption. It was argued that a strong correlation exists between high heels and female sexuality.

Aer Lingus denied Ms. Barry’s claim of discrimination and defended the new uniform, which was launched in February 2020 and designed by one of Ireland’s most prominent fashion designers, Louise Kennedy (pictured)

Ms. Barry further said that the purse supplied to female cabin crew is “decorative and unsuitable” and that it is substantially smaller than the satchel issued to male personnel, thereby “reinforcing an antiquated notion of feminine beauty and sacrificing functionality for the sake of image.”

Ms. Barry noted that “Aer Lingus continues to propagate the “trolley-dolly” image of female cabin personnel with their uniforms and accessories.”

Ms. Barry has been an Aer Lingus employee since 1994 and a member of cabin crew since 1995. She sought an injunction mandating equal treatment in the provision of uniforms and accessories of equal utility.

Regarding the new uniform, Aer Lingus said that Ms. Barry was not discriminated against on the basis of her gender or otherwise.

Aer Lingus responded that there was significant engagement with employees regarding the new uniform, and that “the fact that a person may detest a particular piece of the design does not make it discriminatory.”

Aer Lingus stated that the uniform gives a trouser alternative for female cabin crew and acknowledges that a cardigan can be worn under the jacket during cold weather, resolving Ms. Barry’s concerns over the length of the sleeves.

Ms. Barry stated she was humiliated in her professional obligations due to the fact that the new uniform “projects an outmoded and sexualized image of women.” Aer Lingus flight attendant wearing the 1959 outfit

The airline reported that designer Louise Kennedy engaged with Aer Lingus workers during a flight because she was motivated to address areas of concern regarding comfort and quality, particularly for outerwear and footwear.

According to the airline, Ms. Kennedy was tasked with modernizing and refreshing the styles of all crews’ uniforms while maintaining the carrier’s distinctive appearance.

Aer Lingus argued that the issues raised by Ms. Barry about the uniform had not been raised internally, either as an individual grievance or a collective complaint by Ms. Barry and her union colleagues since the launch of the new uniform in February 2020.

Aer Lingus, represented by attorney Tom Mallon, asserted that as a union representative, Ms. Barry is in a position to voice any concerns relevant to her duty as cabin crew through the proper forums.

Mr. Dolan noted in his conclusions that, during the hearing, he asked Ms. Barry if she agreed that the female uniform should differ from the male uniform, and she responded affirmatively.

After reviewing the case, he determined that Ms. Barry has not been discriminated against and that the complaint is unfounded.

In 1988, Aer Lingus presented air hostesses with their wings at the Shelbourne Hotel in Dublin.