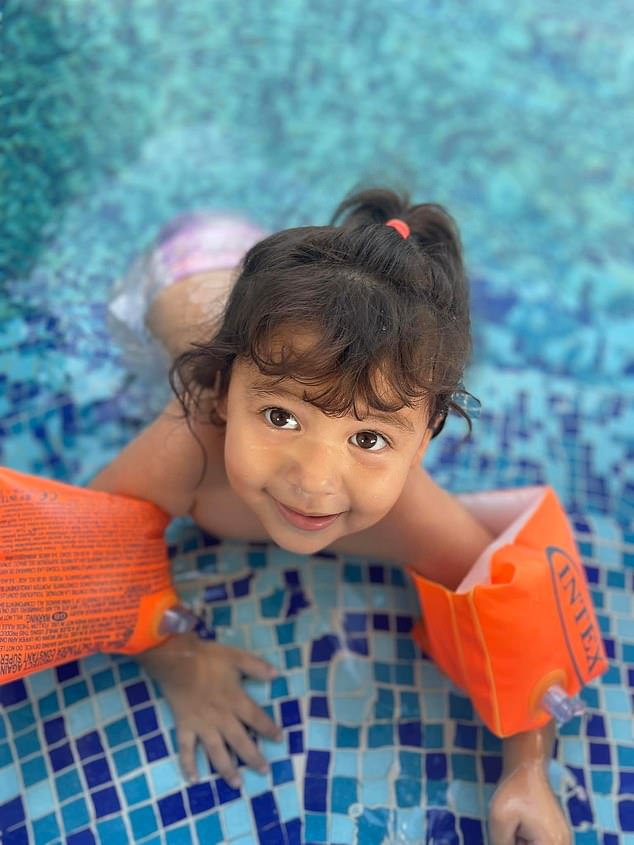 Heartwarming photos have emerged of a toddler meeting her Australian family after she was found wandering alone barefoot at a church in Mexico.

Two-year-old Adelynn was found alone outside the chapel in Cancun on May 3, as authorities search for her mother Tahnee Shanks, 32, and dad Jorge Aguirre Astudillo who have both been reported missing.

Little Adelynn’s uncle Ben Shanks and grandmother Leanne had flown from Queensland to Mexico to bring her home.

On Thursday the toddler met other relatives including cousins for the first time in Mackay, Queensland after landing safely in Australia.

Police are reportedly investigating whether Ms Shanks and her missing partner Mr Astudillo were targeted by criminals in a random attack.

Adelynn had previously been cared for by Mexican child welfare authorities before her relatives arrived. She was given an emergency Australian passport.

Mr Shanks told the ABC that his sister, who is from Queensland’s Whitsundays, claimed she was on a vacation with her family in a small fishing village with poor reception but something felt off.

‘I’m assuming I was talking to him (Astudillo),’ he said.

Ms Shanks had been holidaying around the Yucatan peninsula and was set to return to Australia after her relationship broke down with her partner Mr Astudillo.

The distraught sibling said Ms Shanks had stopped using social media days before she went missing – which was unusual for the mother.

‘Look, it is very out of character, she is always on social media, she is always posting photos of her and Addie constantly, it is a constant stream of it, so for her to drop off, we knew something was wrong,’ Mr Shanks told Sunrise in the days after his sister disappeared.

Ms Shanks’ relatives have barely slept in the nine days Tahnee has been missing.

Her brother Dan spoke to her just two days before she disappeared.

He is fearing the worst and relatives in Australia are preparing to look after Adelynn indefinitely.

Mr Shanks also said his sister was due to fly home to Australia on June 22, after splitting from Mr Astudillo, after he reportedly cheated on her.

Quintana Roo’s general attorney Óscar Montes de Oca Rosales said the couple had visited Cancun for a day and then planned to drive back to Merida.

On the way there they turned around and returned to Cancun where they then disappeared and Adelynn was later found by herself.

Mr de Oca Rosales said Mr Astudillo had a domestic violence claim against him from a previous girlfriend, but both he and Ms Shanks were being treated as victims in the investigation into their disappearance.

The Shanks family say they are confident Mexican authorities are doing what they can to find the missing mum.

The family has offered a $5,000 reward for Tahnee’s safe return.

The last known photos of Ms Shanks and Mr Astudillo show them in Las Coloradas, Yucatán, 93 miles from where their daughter was found in Cancún on Mexico’s tropical southern tip.

Ms Shanks moved eight years ago from Australia to Merida, Mexico. She split from her partner a year after Adelynn was born.

‘She would have been home months ago,’ Daniel Shanks told ABC.

‘She thought she could get home easily, but America had shut down visas for Mexican-born people for a period because of Covid. She’s had to go and get an Australian citizenship and passport for Addy to try and divert around that issue.’

Witnesses say they saw a man pass Adelynn to a stranger in front of a church in the 220 Quintana Roo district.

The devoted mum’s social media pages are full of happy snaps of her little girl.

The mother had been traveling the world since she was 18 and describes herself on social media as a ‘Happy Hippy Ginger Ninja meeting around the world one country at a time.’

Before she went overseas, she worked in Australia as an assistant nurse looking after the elderly, which she described as a rewarding career.

‘The travel bug bit me in 2010 taking me on my first 18 month journey through Asia and parts of Europe volunteering and couch surfing my way across the country,’ the freelance writer wrote on a travel blog for the Whitsundays.

Shanks returned home and saved for two years and then headed back overseas traveling through Colombia, Ecuador, Peru, Bolivia and the United States before settling in Mexico.

She is described as having a fair complexion, and has red hair, light brown eyes, 5 feet 4 inches tall, thin build and has a distinctive tattoo along her right thigh.