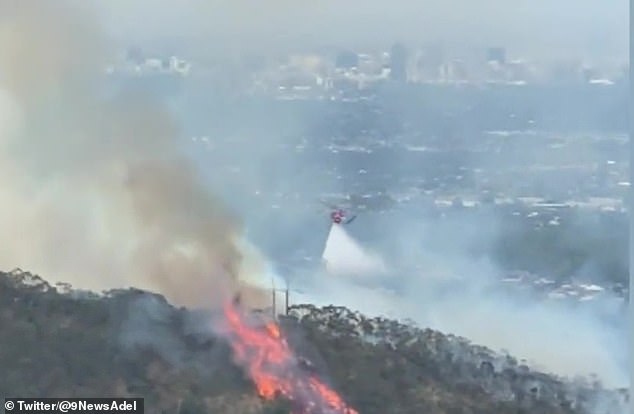 While towns south of Perth, Western Australia, fight a blazing fire, inhabitants of a tiny town in South Australia have been instructed to evacuate or seek cover from an out-of-control blaze.

On Saturday afternoon, the Adelaide Hills village of Montacute, which has a population of roughly 300, received an emergency alert.

Eight planes and fifteen tankers are fighting an uphill battle to put out the fire that is blazing southeast of the town.

In the Black Hill Conservation Park, firefighters must navigate difficult terrain that is steep and difficult to reach.

Residents are urged to respond since the blaze may endanger their safety.

“Leave now. The SA Country Fire Service advised people to make sure the route was free before moving to a safer location.

“Do not enter this location; the situation is hazardous.” Although there are fire personnel responding, do not anticipate a fireman at your door.

Police have issued a warning that the out-of-control fire may worsen on Saturday afternoon due to rising wind.

“The fire at Montacute is out of control.” According to a statement from the police, “conditions are continuously changing” since this scrub fire is burning both in a southerly and an easterly direction.

A severe wildfire warning has been issued for sections of Western Australia’s Donnybrook-Balingup Shire, which is located 200 kilometers south of Perth.

A total of 100 firemen are on the site putting out the fire.

Additionally, aerial help has been sent.

The blaze, which has now consumed 5095 hectares, is advancing quickly to the northwest, according to the Department of Fire and Emergency Services.

They claimed that lightning started the fire.

»Adelaide Hills were evacuated by another southern Western Australia fire«