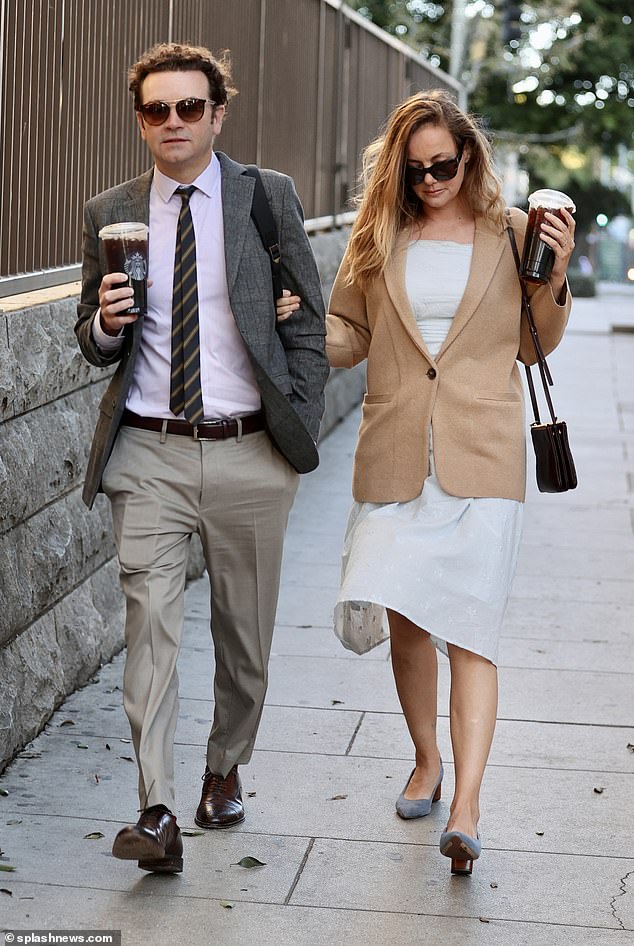 Thursday, an actress who co-starred with one of the women accusing Danny Masterson of rape testified that her’shaken’ companion disclosed that she had been assaulted.

47-year-old Jordan Ladd said in court that she was astonished when Jane Doe 2 informed her about the night in late 2003 when the actor allegedly raped her in his shower and bedroom.

“It was a difficult conversation,” recalled Ladd, who has been intermittently friendly with fellow actress Jane Doe 2 for more than two decades, since since the two appeared in a film together.

She disclosed to me that she had been the victim of what I identified as date rape.

According to the victims, he allegedly loaded them with wine prior to assaulting them and occasionally attacked them while they were unconscious. One said that Scientology representatives exerted pressure on her not to disclose the crimes to the authorities.

Thursday, Ladd testified that she spoke with Jane Doe 2 following the alleged assault.

She appeared agitated and was literally trembling. She was emotional…her voice shook as she spoke,’ said Ladd.

She claimed to have had sexual relations with Danny Masterson, but she kept saying “no” and “I don’t want to do this” repeatedly.

She reported that he did not stop, so she gave up.

Ladd responded, “I was astonished,” when Deputy District Attorney Ariel Anson inquired about her reaction to her friend’s news. I felt powerless and speechless.

She emphatically stated, “Do not tell anyone.” She appeared fearful and puzzled.

She obstinately silenced me and was scared that I might say something to another person.

Ladd, who has appeared in a number of Hollywood horror films, stated that she had been “very friendly” with Masterson before to the Jane Doe 2 episode.

In contrast, when she was in Masterson’s wedding party the following summer, she remarked, “He was really cold and icy to me.”

Ladd, who is not a Scientologist, testified during cross-examination by Masterson’s attorney, Philip Cohen, that during her talk with Jane Doe 2 about the alleged rape, she expressed concern about contracting a sexually transmitted illness because Masterson had not worn a condom.

“She was humiliated,” she added.

Cohen asked Ladd if Jane Doe 2 stated it was her idea to shower with Masterson. Ladd responded, “No.”

And when Cohen questioned her if Jane Doe 2 had told her, even after the incident, that she and Masterson were likely to begin dating, she said, “No.”

Earlier on Thursday, a Los Angeles detective who investigated the case stated that she had warned his three accusers not to speak to one other or the media, and was astounded when their accusations were published in the media.

Thursday, Detective Esther Reyes, a 29-year veteran of the Los Angeles Police Department, told a court that she was adamant that the three avoid actions that would “damage or contaminate” the police investigation into their cases against the Scientologist and actor.

After being interviewed by Reyes in 2017, all three defendants admitted in court that they communicated with one another.

Reyes told the court on Thursday that she had warned all three not to communicate with each other or other potential witnesses.

Philip Cohen, the attorney for Masterson, questioned Reyes about ‘cross-contamination’ in an investigation.

Reyes concurred with Cohen that autonomy is crucial.

She stated, ‘It is essential to obtain a witness’s independent memory that has not been altered in any way by speaking with other witnesses.’

She stated that she was concerned about the potential ‘harm’ to her investigation if the three accusers discussed the issue with one another.

Reyes informed the court that she instructed Jane Does 1 through 3 not to speak to the press or media during the inquiry; nonetheless, she later discovered that “information had been disclosed to the press by one or more of the Jane Does.”

A few days after the 2003 event with Masterson, Jane Doe 2 spoke with her mother, who was a Scientologist at the time.

The elderly lady fought back tears as she recounted the chat with her daughter on Thursday.

“She was quite distressed,” her mother stated.

She reported that he was relentlessly approaching her from behind like a jackhammer, despite her repeated requests for him to stop.

Anson asked her mother if she ever used the word ‘rape’ in that conversation. Her mother responded, ‘Not that I recall. I recall her stating that she was being pummeled.

Cohen cross-examined Jane Doe 2’s mother, who contradicted his assertion that her daughter still desired a love relationship with the actor after the sexual encounter at Masterson’s home.

She continued, “I recall her stating she wanted a date, but it turned out to be something very else.”

Masterson, a married man with an eight-year-old kid, has pleaded not guilty to all allegations.

If convicted, the star of That ’70s Show faces a sentence of 45 years to life in jail.

Lisa Marie Presley, the daughter of Elvis Presley, is on the witness list as a former Scientologist.

Masterson remains an active member of the Church while his three accusers were all Scientologists.

Masterson, who has been free on bond of $3.3 million since his arrest in June 2020, appeared for the tenth day of his trial in downtown Los Angeles on Thursday, wearing a gray jacket, beige slacks, off-white shirt, and gray striped tie.

His accusers, whom DailyMail.com identifies only as Jane Does 1 through 3, are all former Scientologists and are suing him and the Church of Scientology in civil court, alleging that they have been harassed, followed, and intimidated since reporting him to police.