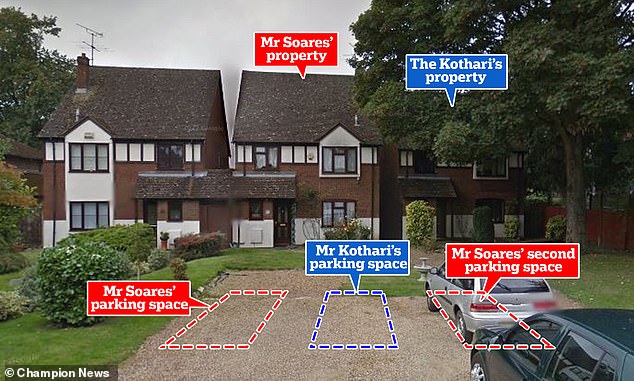 Two accountants who have already spent £100,000 in a seven-year parking dispute are preparing to re-litigate, despite a judge’s advice not to squander any more money.

Since 2015, Ivan Soares, 53, and Manish Kothari, 41, have been embroiled in a protracted dispute around parking in their cul-de-sac.

The dispute focuses around three parking spots outside the Harefield, west London, homes of Mr. and Mrs. Soares and the Kotharis, two of which are held by the Soareses and one by the Kotharis.

The Soareses, however, “revoked” the exchange deal in 2018 as a result of charges of “inconsiderate parking.”

Mr. Kothari, together with his brother and sister-in-law, Sandip and Bindu Kothari, accuse Mr. Soares and his wife Sunita of’selfish parking’, alleging that they left their vehicles inches apart from theirs on purpose, making it difficult for them to access their car door.

Mr. and Mrs. Soares accuse their neighbors of intruding on their parking area, and things have escalated to the point where the police have been called.

Mr. and Mrs. Soares own two spots on the left and right, while the Kotharis own the third place in between. However, under the exchange agreement, the Soares family occupied the two spaces to the left.

Outside the Central London County Court, Ivan Soares is embroiled in a parking dispute.

The Kotharis are countersuing for an injunction to prevent Mr. and Mrs. Soares from blocking the common driveway.

Although Judge Simon Monty has urged the parties to settle their disagreements without spending any more money, a three-day trial has been scheduled for the re-litigation of the case, which has already cost £100,000 in legal fees.

Historically, Mr. and Mrs. Soares had permitted a “swap” arrangement in which they parked their vehicles in the two adjacent spots closest to their home, while the Kotharis utilized the space to the right.

This allowed the couple to park their automobiles together in front of their property, while their neighbors parked closer to their residence.

In September 2018, Mr. and Mrs. Soares’rescinded’ the exchange agreement, their attorneys informed Judge Monty, citing a dispute between the neighbors about the arrangements, which arose from accusations of inconsiderate parking.

They are now seeking compensation because the Kotharis ‘trespassed’ on their property by continuing to park in the contested area for over two years after the agreement expired.

However, the Kotharis are countersuing for an injunction to prevent Mr. and Mrs. Soares from blocking the common driveway or obstructing their parking in any other manner.

In court records, the Kotharis argue that their neighbors have prevented them from using their parking space in the midst of three.

They assert, “The claimants have intentionally caused the defendants a nuisance by parking a few inches away from the defendant’s car, making it exceedingly difficult to approach and depart the vehicle.”

“The annoyance had become so severe that the defendants stopped parked in their single parking space on July 23, 2022.”

“The defendants [the Kotharis] are seeking damages as the court deems appropriate on this issue, as this intentional annoyance has persisted for many years,”

Maxwell Myers, the attorney for Mr. and Mrs. Soares, stated that the Kotharis first argued whether their neighbors owned the area on the right, closest to the Kotharis’ house – and referred to by attorneys as the ‘new space’ since it was added after the houses were constructed.

Nevertheless, Mr. and Mrs. Soares asserted that it was included in the documents when they purchased the home in 2006, and a court finally gave them ownership and occupancy of the area last year, determining that they had also properly renounced the exchange deal, he said.

The dispute between the neighbors in Harpfield is over three parking places in front of their homes.

According to him, the couple is now demanding thousands of dollars in compensation for the Kotharis’ use of the room between September 2018 and August 2020, as well as a permanent injunction prohibiting their usage of the facility.

“Mr. and Mrs. Soares say that the defendants, in trespass, continued to park in the new space and, in violation of covenant and annoyance, obstructed the driveway by parking automobiles in front of the spots,” the attorney told the judge.

They are also seeking the court’s advice on how to properly demarcate the three zones surrounding the gravel driveway to prevent future conflict.

The attorney stated that the status quo was untenable.

However, Mr. Kothari, who presented his own case in court, said that he and his family were victims of obstructed entrance and “trespassing on our legitimate parking place.”

He alleged that the manner in which Mr. and Mrs. Soares parked occasionally left his automobile hemmed in.

The Kotharis are countersuing their neighbors, seeking a court order prohibiting the Soareses from trespassing on the Kotharis’ property and from “parking in such a way as to intentionally create stress and disturbance.”

“We’ve tried to interact, we’ve been nice, but we can’t even go to our car,” he told Judge Monty at Central London County Court.

Since July, we have been unable to park our vehicle in our designated parking area.

But Mr. Myers denied that Mr. and Mrs. Soares had ever trespassed on Kothari parking spaces, therefore an injunction was unnecessary.

He stated that Mr. and Mrs. Soares would never have needed to park in the Kotharis’ slot because there is sufficient space for all three cars to be parked simultaneously.

Judge Monty noticed that the police were at one time involved in the altercation, adding, “Emotions are clearly running high.”

“If the parties want to spend £50,000 arguing about a few feet of parking, I guess they may,” he added, “but it seems to me that they are arguing about very little at a high cost to themselves.”

Mr. Myers, a lawyer, then informed him, “It’s twice that,”

Due to a shortage of court time, Judge Monty postponed the trial until next year, at which point the problems of trespass, the requested injunctions, and who will pay the £100,000 cost will be resolved.