Skip to content
Go Home «» News «» World News «» According to the negotiators, a $1.5 trillion long-term bill has been agreed upon 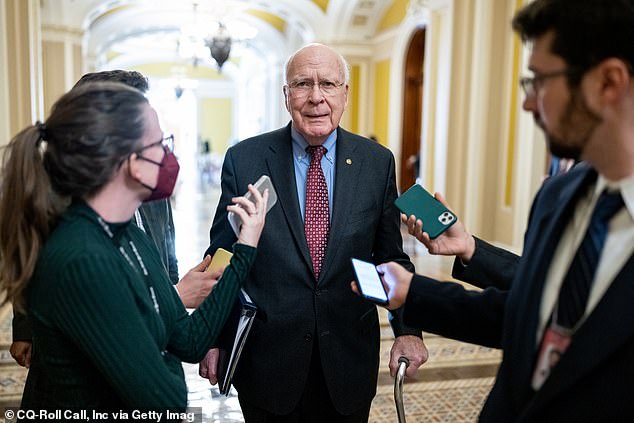 A group of leading House and Senate appropriators unveiled the basics of a compromise that’should’ be able to pass Congress, which would sidestep a government shutdown crisis by eliminating the need for brief stop-gap bills.

In statements from three key appropriations negotiators, Democratic Senator Patrick Leahy, Republican Senator Richard Shelby, and Democratic Representative Rosa DeLauro, they did not specify how much money they had agreed upon.

All of this occurred as legislators scrambled to find a way to strike an agreement before government funding expires at midnight on Friday, eager to return home and escape yet another chapter of holiday shutdown drama.

The White House under President Biden has also pushed for Congress to complete its spending duties.

Sen. Patrick Leahy, Democrat of Vermont, secured an agreement with Sen. Richard Shelby, Republican of Alabama, and Rep. Rosa DeLauro, Democrat of Connecticut, to fund the government through the end of the current fiscal year. It must still pass both chambers, as a temporary funding bill expires on Friday.

“If all goes well, we should be able to complete an omnibus appropriations bill by December 23,” said Shelby, the Senate Appropriations Committee’s retiring Republican chairman.

The announcement came hours after the House began moving a stopgap spending bill to avoid a partial government shutdown that would otherwise begin on Friday, allowing time to pass the comprehensive full-year bill, which is expected to include more than $1.5 trillion in funding and will run through September 30, 2023.

The chair of the House Appropriations Committee, DeLauro, stated that members will “work around the clock” to complete the task.

Wednesday will be the first procedural vote on the interim legislation.

Senate Majority Leader Charles Schumer stated on Wednesday that the events of the last decade demonstrate that those who risked government shutdowns for political gain always lose in the end. He referred to it as a “roadmap for funding the government by the end of the 117th Congress” and noted that “much work remains.”

The “omnibus” package for the entire fiscal year is also expected to include new emergency cash to assist Ukraine in its fight against Russian military.

It is also expected to incorporate a separate bill altering the method by which Congress certifies U.S. presidential elections by amending the Electoral Count Act.

The negotiators have compromised on a Defense budget of $858 billion, a 10% increase from the previous year’s budget. The Hill claimed that there was a $26 billion gap between the two sides negotiating non-defense funding.

The latter is intended to prevent a repeat of the violent unrest that occurred on January 6, 2021, when supporters of then-President Donald Trump attempted to prevent Joe Biden from being certified as the winner of the 2020 presidential election.

Lawmakers have protested that Trump was able to exploit legal gaps, and they seek to emphasize the essentially ceremonial position of the vice president, whom Trump wanted to refuse to accept citizens’ and states’ votes.

Senate Minority Leader Mitch McConnell stated that his party’s goal is to complete work on the omnibus bill by December 22. Before the deal, he told reporters, ‘We intend to be on the road on the 23rd returning home.’

Next year, when the Republicans take majority control of the House, any negotiations on the funding measure will be more difficult. House Minority Leader Kevin McCarthy has committed to hold Democrats accountable for their spending, and conservative Republicans have been demanding for large cuts to domestic expenditure, which Democrats will seek to prevent.

»According to the negotiators, a $1.5 trillion long-term bill has been agreed upon«