The immediate past Managing Director of Anambra Broadcasting Service, ABS, Dr Uche Nworah has handed over the reins of power of the organization to the Director of News and Current Affairs Department of the station, Mr Gab Okpalaeze.

Dr Nworah performed the handover ceremony at the market square of ABS Film Village immediately after the valedictory meeting of the Board of Management of the organization which held at the ABS Corporate Headquarters, Awka. 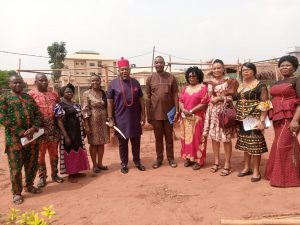 Correspondent David Okpokwasili  reports that the handover followed completion of eight-years as Managing Director and Chief Executive Officer of the ABS.

Dr Nworah was appointed into the helm of affairs of the ABS in 2014.

The former Managing Director first conducted the members of Board of Management on a tour of the multi-million-naira ABS Film Village, being constructed in partnership with Alkebulan Productions Limited, which is expected to come on stream soon.

Speaking while handing over to Mr Okpalaeze, who is the most senior staff in the establishment, Dr Nworah appreciated Governor Willie Obiano, the Board of Directors, Management, members of staff, and all stakeholders for their support during his eight years of stewardship in the organization.

He assured to continue to provide his support while asking the ABS to continue reaching for the sky and remaining champions in all they do.

Responding, the new Acting Managing Director, Mr Okpalaeze congratulated Dr Nworah for a successful eight years in ABS and for the innovations he introduced in the ABS and assured him that the Management and staff of the ABS will not relent in their efforts to keep the bars even higher.