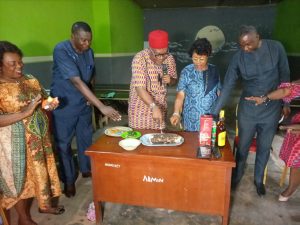 The celebration was done in accordance with the Igbo tradition and culture.

Declaring open the event which was held at Ezeudo Square, ABS, Awka, the Managing Director and Chief Executive Officer of ABS, Chief Uche Nworah, said that new yam festival as age long Igbo culture is very significant to the growth, development and sustainability of Igbo tradition.

He further explained that outside promoting Igbo culture, such gathering triggers togetherness and bonding of staff members of the organization, even as he thanked the committee that organised the event as well others who contributed in one way or another and encouraged Ndi Anambra to embrace agriculture for food sufficiency.

Chief Nworah after his speech performed the symbolic cutting of the roasted yam.

In their separate remarks, the Director of Programs of ABS, Mrs Nneka Ekwunife and a staff of the station, Mrs Uju Egolum said that new yam festival provides opportunity to appreciate God for a successful farming season and prayed God to multiply the proceeds of the next farming season in order to enthrone better celebration.

On his part, Chief Anthony Ugorji of the ABS who expressed joy being part of the celebration, noted that such festival should be given maximum attention by Ndigbo to keep projecting and sustaining their culture.

The ABS new yam Festival Committee Chairman, Mr Louie Okoye and a committee member, Mr Daniel Ekwueme, echoed  the need for all to embrace agriculture, while commending the MD/CEO of the ABS for his support.

The event attracted members of the Board of Management of the station, including the Director of News and Current Affairs Department, Mr Gab Okpalaeze, Director of Commercial Services, Mrs Beatrice Akwanamnye, among others.

The annual celebration of new yam festival has placed Anambra Broadcasting Service (ABS) top among its contemporaries, with regards to promotion of Igbo culture

Correspondent Valentine Mbadugha reports that Chimezie Otika otherwise known as Otika Oja, put up a colourful performance as the Ogene group kept everyone dancing to the melodious sounds of Ogene music.