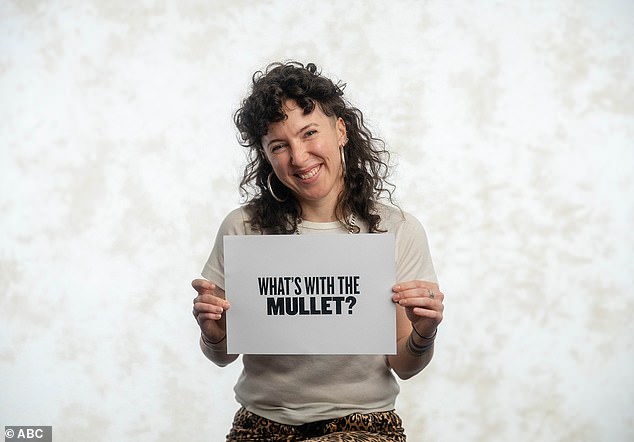 A group of Aussie bogans have revealed how they really feel about being part of one of the country’s most scorned subcultures.

The group of nine self-confessed bogans from all corners of Australia were thrust into the spotlight in an episode of the ABC’s You Can’t Ask That.

The battlers, many sporting a mullet or a Southern Cross tattoo, answered a range of hard-hitting questions about the best and worst parts of being a bogan.

One viewer asked if a person was born a bogan, or became one.

Bonnie Tonic, a stripper from Central Australia, said she had always joked with people that she had come out of the womb holding a can of lager.

She said the first thing she did after turning 18 was head to ‘the t**** bar in Rockhampton’ which kick-started her career as the ‘Outback Stripper’.

‘I’m the sexiest bogan you’ll ever meet,’ she joked.

‘I think there’s something stuck in me, I’ll be a bogan forever’.

Quacker Jack, from Forbes, said it was his rough upbringing that made him a bogan, while Perth author Holden Marshall said he was ‘born into a bogan setting’.

Megan Farquhar, from Newcastle, said there was an element of struggle in being born a bogan, and said most hadn’t been born with a silver spoon in their mouths.

Many described not having a lot of money growing up, with self-proclaimed bogan Marc Ryan from Adelaide recalling having pancakes for dinner for weeks on end.

Bogans can usually be seen wearing singlets, thongs, footy shorts and a flannelette, and sport mullets or rat tails, with the addition of tattoos and piercings.

In response to why bogans sounded so unsophisticated, Benny, from Camperdown in Victoria replied simply: ‘Simple answer. I am f***ing unsophisticated’.

‘I think cause sophistication is bull****, Mr Marshall hit back. ‘Pretending you’re something you’re not is bull****.’

Mr Jack explained bogans could sound unsophisticated because they were used to shouting over each other when it got loud at the pub.

‘That’s why they may think we sound unsophisticated.’

Benny said he used swear words as joining words, and admitted he would struggle to put a sentence together without them.

‘No matter who I meet, I talk to them the same. The way I’m talking to you, I’ll talk to the bloody Queen like this, you know?’ he said.

Mr Marshall said being a bogan meant people were quick to write him off.

‘People always assume I’m an idiot. That I have nothing to offer or that I don’t understand stuff,’ he told the program.

‘I’m a writer so I end up mixing with a lot of book-ish people, but I usually feel uncomfortable at most of those events.’

The group were asked if ‘Aussie pride was code for racist’, prompting a fierce debate on the significance of holding Australia Day on January 26.

Mr Ryan said it was a tricky question, because as much as he loved his country he hated how minorities were treated in Australia.

‘We’ve got a really s****y history, Australia has got a shocking history,’ Ms Jessie agreed. ‘I’m thinking of Australia Day. We shouldn’t call it that anymore.’

Frida Deguise, from Sydney, said she had never celebrated Australia Day, not because she wasn’t proud but because a ‘generation had been stolen’.

Benny disagreed and said people could cope for one day of the year.

‘I think they’re going to argue about it no matter what f***ing day it’s on,’ he said.

‘If you don’t like it, stay in bed that day. All these c**** want to change everything.’

Mr Marshall said there were Australians who disguised racism with patriotism.

‘They pretend that what they’re doing is being proud of their country, when they’re actually being proud being white,’ he said.

Towards the end of the episode the group shared their softer side and admitted that their day-to-day life could be difficult sometimes.

Coming out as homosexual from the background that I came from was very hard,’ Mr Marshall said. ‘I lost a couple of mates’.

‘They just stopped talking to me and that f***ed me up.’

Mr Jack said he had been raised an orphan and as a result had been in and out of jail and homeless for the last 18 years.

Others said they had experienced depression, anxiety, PTSD and loneliness and admitted they had an unhealthy relationship with alcohol.

‘Some days I wish I was in control of it, until I get drunk, I guess, and then it doesn’t matter again,’ Mr Jack admitted.

However, many said they lived by the iconic Aussie motto: ‘She’ll be right’.

‘I think a lot of the time, if you’ve had a hard life and if you don’t find a way to get tough, it’ll end you,’ Mr Marshall said.

‘I just take every day and as it comes, and just have gratitude,’ Ms Tonic said.

Despite being one of Australia’s most ridiculed subcultures, they all said they were proud to be bogans.