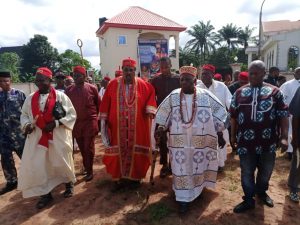 In appreciation to God for a bountiful harvest season, Abagana Community in Njikoka Local Government Area over the weekend celebrated its 2021 New Yam Festival showcasing their cultural heritage.
The Prime Minister of the community, Dr. Nwachukwu Anakwenze flanked by the member representing Njikoka one Constituency in the state Assembly, Honourable Pete Ibida, the traditional ruler of the town, Igwe Mbamalu Okeke and the transition committee chairman, Njikoka Council Area, Mr. George Ozo performed the cutting and eating of the new yam for his household and kindred.
Correspondent Chibuzo Obidike reports that traditional Prime Ministers from different communities across the state among other groups, individuals, friends and well-wishers, who witnessed the cutting of the new yam by Dr. Anakwenze, later presented him, with some gifts.

Meanwhile, Igwe Okeke had earlier kick-started the celebration by performing the Iwa Ji  followed by the traditional Prime Minister and down to the entire community.
Dr. Anakwenze , a US-based surgeon, revealed that l culture of Ndigbo pays respect to yam because it is considered as a generous crop during harvest.
He noted that as part of efforts to ensure sustenance of the culture, Ndi Igbo in the diaspora have instituted an Igbo village with schools that focus on all aspects of Igbo culture and values including the new yam festival.
The traditional Prime Minister reminded all that the festival was aimed at celebrating hard working farmers, promoting agriculture and encouraging young people to involve selves in legitimate businesses.
For Honourable Ibida and Mrs. Flora Ilonzo, the festival of individuals cutting the new yam in their various homes is the commencement of the eating of the new yam in individual homes.
A Nollywood Actor and producer, Mr. Ugezu J Ugezu  urged Nollywood producers   to showcase the culture, tradition, values, norms and language of Ndịgbo.