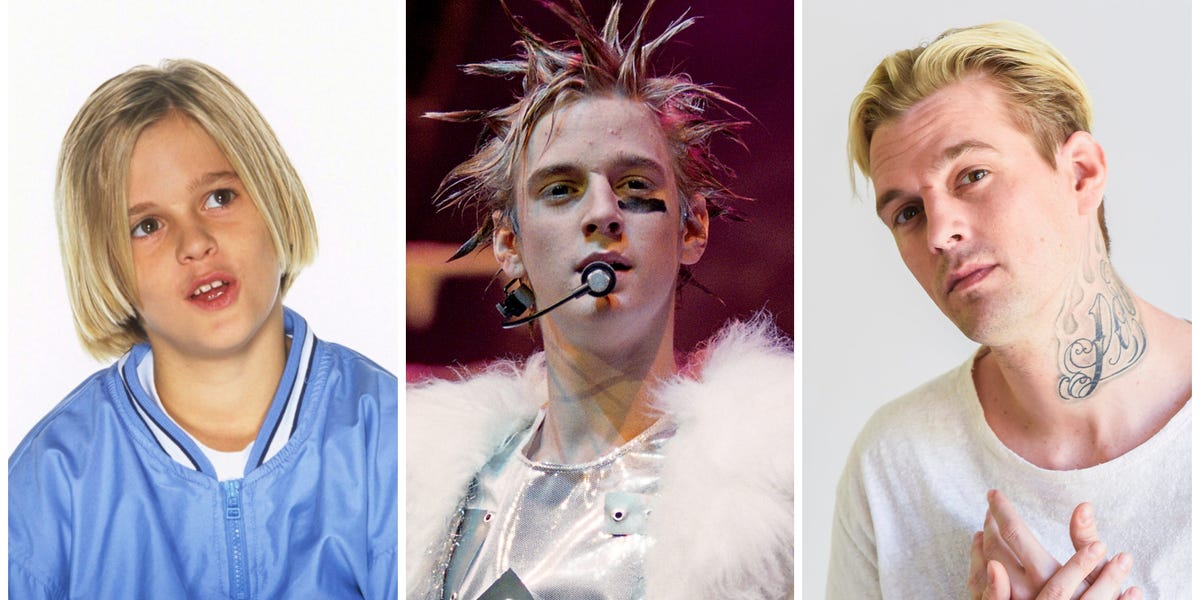 Aaron Carter emerged onto the music world at the age of nine with the publication of his debut single, “Crush on You,” in August 1997. His self-titled debut album was released in Europe in December 1997.

In 1997, Aaron Carter broke into the scene as a child.

In June of 1998, Carter re-released his debut album in the United States.

Aaron Carter visited Germany in May of 1998.

In 1999, Carter performed alongside N*Sync and other contemporary stars at the Big Help Concert.

In 1999, Aaron Carter stood beside the members of N*Sync.

In September of 2000, Carter released “Aaron’s Party (Come Get It),” his second and most popular album. This album featured hit hits such as “I Want Candy” and “That’s How I Beat Shaq.”

Carter and his older brother Nick, a member of The Backstreet Boys, attended the eleventh annual Billboard Awards in December 2000.

In April 2021, Carter performed on “The Tonight Show With Jay Leno” as a musical guest and was interviewed by the presenter.

In 2001, Jay Leno had an interview with Aaron Carter.

In 2001, Carter joined the cast of the Broadway musical “Seussical” as the character JoJo. During the months of April and May of that year, he played the role.

Aaron Carter performed the role of JoJo in “Seussical.”

The source is the Playbill

In August 2001, he also released his third studio album, Oh Aaron. “Oh Aaron” was the lead song and featured Nick Carter and the all-girl ensemble No Secrets.

Billboard and VladTV are the corresponding sources.

In April 2003, he appeared with his ex-girlfriend Hilary Duff at the Hollywood premiere of “The Lizzie McGuire Movie.” After meeting in 2000, the couple had a sporadic relationship, which ended in 2003.

In 2003, Aaron Carter and Hilary Duff attend the premiere after-party for The Lizzie McGuire Movie.

In 2006, Carter and his family featured in the eight-episode reality television series “House of Carters,” which lasted only one season.

The source is IMDb

In 2009, Carter appeared on the television series “Dancing with the Stars,” dancing partner Karina Smirnoff. Almost making it to the finals, he and his partner were ultimately eliminated.

In 2009, Aaron Carter and Karina Smirnoff appeared on “Dancing with the Stars”

Carter returned to stage acting in 2011 when he joined the cast of the off-Broadway production of “The Fantasticks.” His performance was so well received that Carter extended his contract four times.

Aaron Carter is in rehearsals with ‘The Fantasticks’ creator Tom Jones for his Off-Broadway stage debut.

The source is the Playbill

Carter played in New York City in 2013 as part of his “After Party Tour.” In an interview with Billboard, he stated that he worried he would never tour again, but the reception to his tour was “crazy.” He continued to make music in the years that followed.

In 2018, Aaron Carter posed for a photograph.

Carter and his ex-girlfriend Melanie Martin posed together at Lamar Odom and Carter’s Celebrity Boxing Face-Off in 2021. The couple was expecting a kid at the time, and in November 2021, they had a son named Prince.

In 2021, Aaron Carter and Melanie Martin appear on the red carpet together.

Getty Images and Entertainment Tonight are a source.

In February 2022, Carter performed at the Kings of Hustler club in Las Vegas, just nine months before his death at age 34 in California.

In February of 2022, Aaron Carter performed in Las Vegas, Nevada.

Insider and Getty Images are the citation for this source.