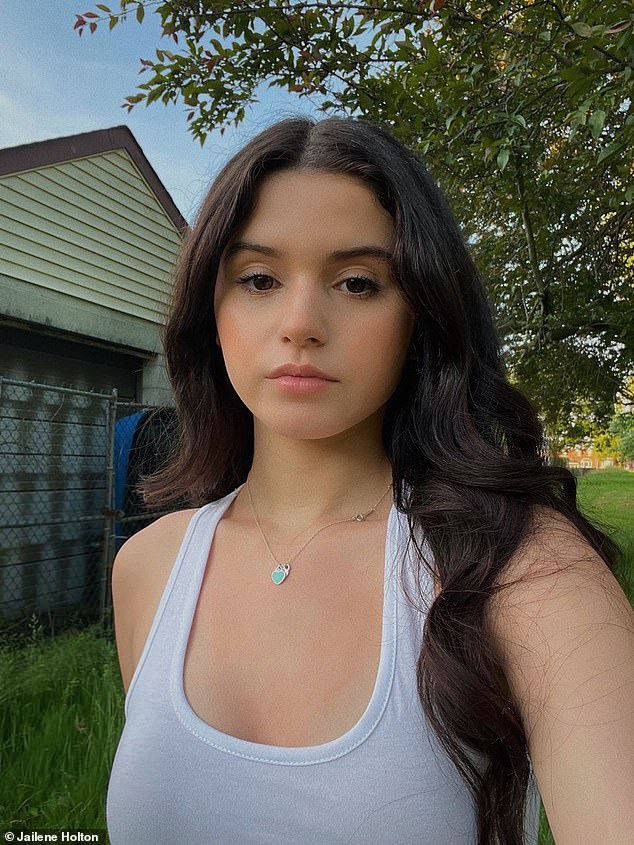 A young woman was shot and killed in a Philadelphia bar after a man became enraged because the pool table was occupied and fired several shots at the establishment from 200 feet away before fleeing.

Jailene Holton, 21, of Philadelphia, was shot on Tuesday night while standing in the back of the Philly Bar and Grill after being dragged out for a night out with her friends.

Her family claimed she rarely left the house.

Holton, who had recently turned 21 and worked at Target, was the group’s designated driver and was corralled by friends who told her: ‘You’re 21 now, you got to get out,’ according to Fox 29 Philadelphia.

The group is said to have stopped at a Topgolf before arriving at the bar, which hosts a pool tournament on Tuesday evenings using its single billiards table.

According to Fox 29, the man, who has not been identified, came in with two friends and became irritated that other pool players were occupying the table. Just after 11:30 p.m., the bouncer ejected the man and his friends.

Once outside, the man allegedly fired 15 shots at the building, 10 of which struck the exterior and five of which punctured the glass windows before fleeing in a dark-colored pickup truck. One of the bullets struck Holton, who was standing in the back of the bar with other customers.

She was the only person injured in the shooting. Another customer, a man, was injured by the shattered glass and was treated.

Police Chief Inspector Scott Small said they found Holton ‘unresponsive’ and ‘suffering from a gunshot wound to the head,’ according to the Daily Beast.

She was rushed to the hospital, where doctors performed an emergency surgery, but she eventually succumbed to her injuries around 4am, according to the Daily Beast.

Holton’s mother, who was not named, told Fox 29 that the hardest part was that Holton ‘never goes out.’

Her uncle, James Holton, recalled being shocked upon hearing the news.

‘I’m on my way home from work and I get the call and I’m like: “What do you mean she’s been shot?”‘ he told CBS Philadelphia. ‘She was a good kid. She worked and was home a lot. She wasn’t a street person and didn’t go out often. She stood to herself.’

Holton’s uncle also slammed the city, calling it the ‘wild west’ as it continues to be doused in gun violence. The city has seen more than 250 homicides already this year.

Last year, the city recorded the worst ever homicide rate with 562 in a year.

‘When are people going to get fed up with this reckless shooting in this city?’ James questioned during an interview with Fox 29. ‘[The shooters] get a mouthpiece for 20 seconds on TV and that’s it. Everybody is running around like it’s the wild west out here, cowards shooting at a bar from 100 feet away or more.

‘Someone goes out for 10 or 15 minutes and they’re dead,’ he said dejectedly. ‘How is that fair? How many children have to die for people to say enough is enough?’

He also told the outlet that Mayor Larry Krasner needs to ‘stop handcuffing’ police and for authorities to ‘stop coddling these criminals and hold people accountable.’

A GoFundMe has been set up by the family to help cover funeral expenses.

‘On June 28th our Jailene was an innocent bystander caught in the middle of another senseless act of violence in the city,’ reads the page.

‘Jailene was a young, bright and beautiful young woman with her whole life to look forward to.’