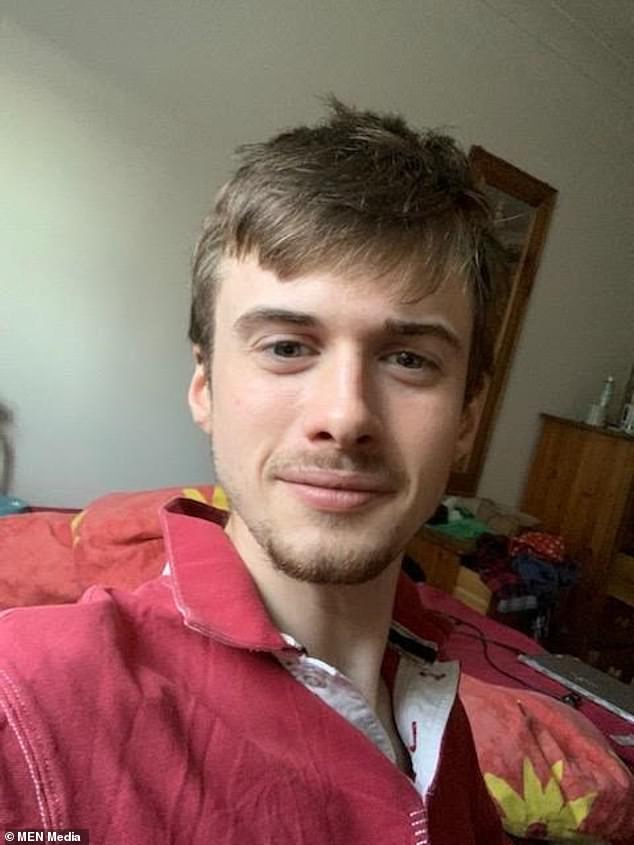 An inquest heard that a university student who was discovered dead by police after a month-long search had fled from his parents as part of a terrible prank.

On December 11 of last year, he went out with his parents Jolyon and Kimberley Gadd to The Warehouse Project in Manchester’s downtown, but he afterwards “ran off” from them.

His father, Jolyon, claimed that he had made a joke out of running away from them earlier that evening.

He said: ‘I went chasing after him, running a couple of blocks. He fell over and I picked him up.

‘He found it really funny that I was so unfit and we walked off arm in arm. Then we went to get something for him to eat, but he ran off again.’

Around 1.10 am on December 11, Mr. Gadd’s family last saw him in the vicinity of the Spar store on St. Mary’s Gate in Manchester.

Before contacting the police, they searched for him in vain for hours.

Just before 1.15am, he was captured on camera leaving Manchester’s Royal Exchange theatre and walking toward St Anne Street.

He was then spotted in a tiny parking lot next to the apartment building Alberton House, which has a view of the River Irwell.

Mr. Gadd was observed crossing the parking lot, which had a steep dropoff into the River Irwell. He wasn’t spotted going out.

Giving evidence at Stockport Coroners Court, Police Coroners Officer David Wood, of Greater Manchester Police, said: ‘It would have been impossible to know that under the car park was water.’

Police carried out a ‘serious investigation’ with a huge search effort across the city centre after he was reported missing. They then discovered his body.

PCO Wood was present on January 10 when Mr Gadd was identified by another officer using an ID and bank card found in his wallet.

The court heard how Consultant Pathologist Dr Andrew Yates carried out a post mortem examination and said he could see signs consistent with Mr Gadd being immersed in water for a long time.

A toxicologist report showed he had some alcohol present in his body.

Senior Coroner Alison Mutch said to his parents: ‘There was nothing you could do to change what happened, it is one of those tragic accidents that sometimes life brings.’

Summarising the tragedy, she said: ‘This is such a very, very sad situation, particularly for Charley’s family who have lost a beloved son and a beloved brother. It’s clear that Charley was a very intelligent young man, with a very bright future in front of him.

‘He was very close with his parents who had a very loving relationship, they had music in common and had been to various music venues together including Wembley, Brighton and then Manchester in December.

‘It’s clear that on the night in question Charley was messing around and ran off and sadly became completely disorientated in a city that he was unfamiliar with. I can only imagine the anguish his parents felt that night looking for Charley and wondering what on earth to do.’

Mr Gadd, of Sudbury, Suffolk, was a student at the University of Essex.

Ms Mutch went on to say that the evidence sadly showed Mr Gadd had gone into the River Irwell and once he was in the water it had been impossible to get out.

She said: ‘At that time of year it would have been very challenging to get out. I am satisfied it was a complete accident that happened due to a series of bad luck.

Ms Mutch gave her sincere condolences to his parents and to the rest of his family, including his brothers.

She said although he had consumed alcohol it was not at a toxic or fatal level.

‘I record Charley died as a consequence of drowning and record his death as an accidental death,’ she added.

His father added: ‘He packed a huge amount into a tragically short life. I was hugely proud of him. I could not have been prouder.’