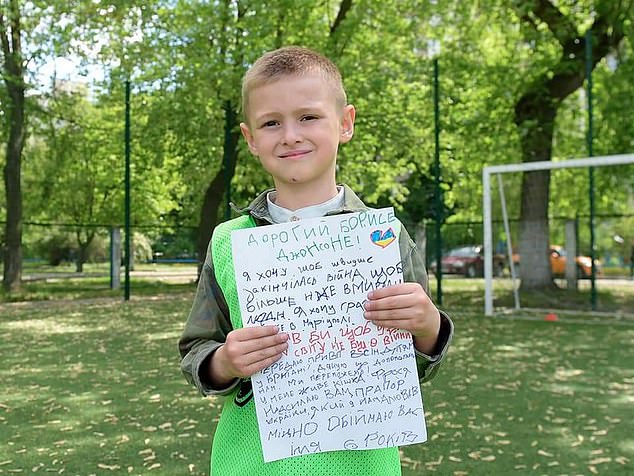 Boris Johnson has received a letter from a six-year-old Ukrainian kid whose parents died in the horrific siege of Mariupol, thanking the Prime Minister and the British people for their assistance.

Last night, the Ukrainian embassy in London announced that the letter will be sent to Mr Johnson. ‘I want the conflict to end,’ Elijah adds in his letter.

‘I want to stop the deaths of people. And I want to play football in Mariupol.’

He adds: ‘I want every kid to be free of war. Warm greetings to all children in the United Kingdom. Thank you for support. We will win!’ Elijah’s parents are thought to have died in a missile strike that destroyed their home.

The little boy was rescued by Ukrainian volunteers from the Russian blockade and is now being cared for by a couple in the town of Slovyansk.

Elijah wrote his note in response to an open letter from Mr Johnson to the children of Ukraine last week, in which the Prime Minister said: ‘Many of you have seen or experienced things no children should witness.

‘Yet every day Ukrainian children are teaching all of us what it means to be strong and dignified.’

A Downing Street spokesman said: ‘The Prime Minister thanks Elijah very much for his letter and praises him for his impressive strength and resilience in the face of so many difficulties.

‘He hopes he will be able to return to play football in Mariupol soon.’