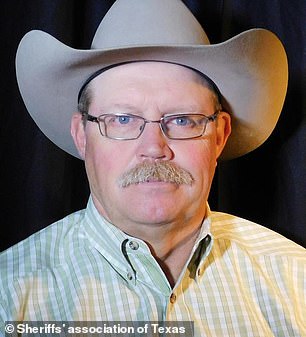 After their car crashed during a chase on Wednesday, a Texas sheriff himself took four illegal immigrants back to Mexico.

According to Sheriff Brad Coe, the automobile that crashed and overturned as deputies tried to pull it over had five passengers who were in the country illegally.

One woman was taken to the hospital for treatment of non-life-threatening wounds.

The four unharmed illegal immigrants were taken by Coe to Border Patrol for deportation, but Coe was unable to process and deport them without first having them undergo a medical examination, which they denied.

Coe declared, “I [couldn’t] let them stroll the streets.” “I still have to defend the Constitution and the citizens of this nation.”

Instead of letting them roam free, Coe made the decision to take the migrants and deliver them an hour away at Eagle Pass, a border crossing between the US and Mexico.

“I couldn’t do it to let them leave, undocumented, unaccounted for, just go because of policy… I am at a loss if Border Patrol declines to take a group for whatever reason.

Seven felonies have been filed against the Mexican driver of the wrecked car, who was also wearing a cartel-related symbol.

Greg Abbot, the governor of Texas, praised Coe’s efforts to fortify the border.

I commend all of our sheriffs for having to act under unusual circumstances.

We are all taking unprecedented action as a result of that,’ he continued.

According to Abbot, the Kinney County Sheriff’s Department has turned away or sent back over 20,000 individuals to the border.

Coe’s initiatives come after 53 migrants died on Monday after being smuggled across the border and abandoned to perish in the back of a derelict semi-truck in the Texas heat.

Near an auto salvage yard on the outskirts of San Antonio, a semi-truck carrying about 100 migrants was abandoned in the heat; among the dead were 27 people from Mexico, 14 from Honduras, seven from Guatemala, and two from El Salvador.

Homero Zamorano Jr., the driver, was allegedly high on meth and pretending to be one of the victims of the accident, according to the police.

The US Attorney’s Office for the Western District of Texas filed a single count of alien smuggling resulting in death against Zamorano. The death sentence is another option for him.

Charges against more alleged accomplices have also been made public.

They might also be sentenced to death if found guilty.

It’s unknown if the truck’s mechanical problems are what caused it to be abandoned.

The Supreme Court declared on Thursday that President Joe Biden did not break the law when his administration stopped the Trump administration’s policy to send immigrants awaiting proceedings back to Mexico in February 2021.

This decision was made in light of current events.

Three liberal and two conservative justices—Chief Justice John Roberts and Brett Kavanaugh—voted in favor of the decision, which was upheld 5-4.

In order to reduce the number of migrants at the border and in the nation while they wait for immigration proceedings, the former president Donald Trump implemented the Migrant Protection Protocol in January 2019.

Lower courts claimed that by rescinding the policy, the Biden administration had broken the law.

According to the Southwest Land Border Encounters, over 1.5 million migrants crossed the southern border, passing through states including California, Arizona, New Mexico, and Texas, between October 2021 and May 2022.

The number of migrants who arrived at the border in May was 239,416; this was the greatest number since the Biden administration.