Skip to content
Go Home «» News «» Breaking News «» A stunned couple discovers an ‘alien hand’ on the beach: ‘Those look like E.T.’s bones!’ 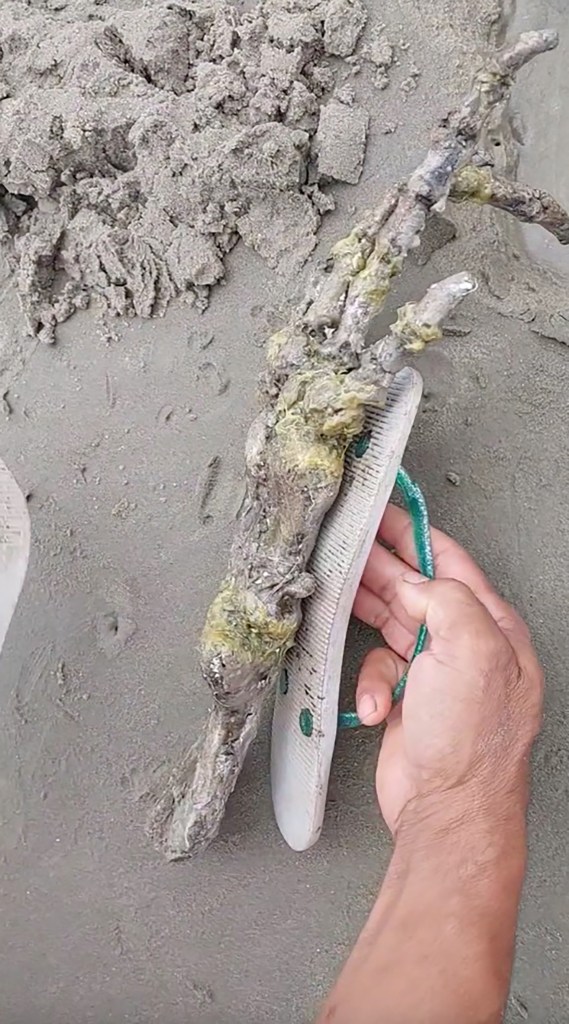 Is life a beach, or a graveyard?

This week, a skeleton hand appendage washed ashore in Brazil, and a scared couple was certain it was “alien bones.”

Leticia Gomes Santiago and her partner, Devanir Souza, were having a stroll on the beach when they stumbled upon it.

The couple videotaped the hand, which was discovered in the dunes of Ilha Comprida, So Paulo State, Brazil, against Santiago’s flip-flop as a size comparison, remarking how “large” it was.

Long past Halloween, a creepy skeleton hand washed up on the shores of a Brazil beach.

“We believe it is not human due to the size and number of bones,” stated Santiago. “What possible could it be?”

They speculated that it may have belonged to an aquatic animal or something from another planet. Consequently, Santiago sought out social media specialists in order to find the facts.

She stated to her followers, “We don’t know what animal it is, and if it’s an extraterrestrial, that’s far worse.”

One commentator continued to make light of the possibility that it belonged to the beloved alien from Steven Spielberg’s 1982 film about a little alien or to a prehistoric creature.

The couple posted a video to show the sheer size of the “hand.”

Someone person said, “Could as well be a dinosaur bone!”

One sensible person said, “Take it to a biologist, because this isn’t natural,” and they did exactly that.

According to Jam Press, marine researcher Eric Comin stated that the creepy hand likely belonged to a cetacean, a group of marine animals that includes dolphins, porpoises, and whales, because to its size.

His findings were based on a cursory examination, and he noted that more testing will be required to verify precisely which marine creature the enigmatic flipper belonged to, but he is certain it’s definitely a dolphin.

The biologist concluded, based only on the photographs he observed and the pace of decomposition, that the creature likely died 18 months ago in the sea.

Based on the creature’s decomposition, the biologist estimated that it had been died for around 18 months.
Jam Press/Leticia Gomes Santiago

Those who locate human remains, he stressed, must notify the Cananéia Research Institute (IPEC).

The pair had trouble figuring out what exactly the bones belonged to in its past life.

As was the case last month, when an unexplained “globster” was spotted on an Oregon beach, it is common for strange or unknown marine animals or their parts to wash up on coasts.

The enigmatic deep-sea critter resembled a big blob and reeked of “decomposing animal,” according to the local who discovered it.

Viewers joked it belonged to ET, or a mermaid.

Henrique Chupill, the spokesperson for IPEC, told Jam Press, “We always emphasize leaving the bones on the beach so they do not interfere with the natural cycle of nutrients in the environment.”

“Eventually, when there is sufficient scientific interest, we will gather them for use in research.” If the animals are recently died, we collect them for necropsies to determine the cause of death.”

»A stunned couple discovers an ‘alien hand’ on the beach: ‘Those look like E.T.’s bones!’«