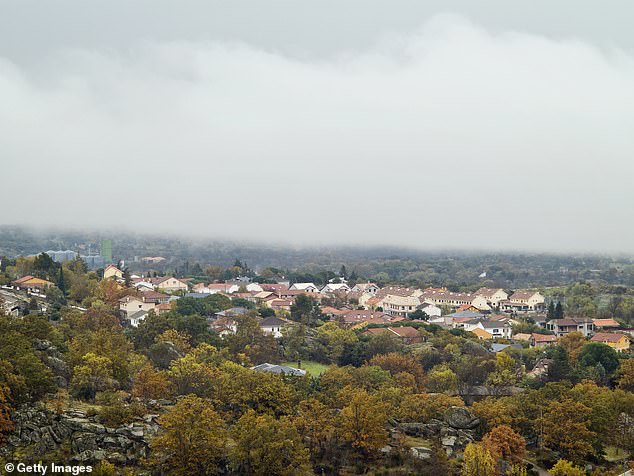 After having sex on the sofa bed, a British couple discovered a hidden camera on the wall of their Airbnb, revealing their holiday misery.

Mike and Michaela Kennedy, from Cardiff, had been driving across northern Spain earlier this month when they decided to book the three-night stay at the £130-per-night property in Zaralejo.

The Sun adds that when the pair arrived, they discovered the property in a “disgusting” state, complete with “piles of garbage” and dead flies.

Despite pictures on Airbnb depicting a spotless home surrounded by gorgeous gardens and conveniently located just 25 miles from Madrid, the couple says they had to spend the first hour of their stay cleaning up the garden.

The frosting on the cake, according to Mr. Kennedy, 55, was the little camera disguised as a motion sensor or air freshener and positioned at the top of the living room wall, which they discovered following an impromptu sex session on the couch bed.

Mr. Kennedy stated, “I spotted the camera mounted on the wall of the living room, staring directly through the living area. It was small enough to be mistaken for a motion sensor; it resembled a cell phone camera.’

He realized that they had engaged in sexual activity “in full view of the camera.”

The Kennedys also claim they endured a terrible night’s sleep due to a ‘industrial pump’ in the bathroom that began producing noise at 11 p.m. and continued throughout the night.

Despite having booked the home for three nights, the couple departed on the first morning after discovering the camera, and Mr. Kennedy filed a complaint with the owner, Luis.

However, the owner advised the couple to expect flies due to the rural location of the home.

Mr. Kennedy protested to Airbnb and described his customer service experience as “shocking,” alleging that he was initially informed that hosts are permitted to use cameras for “security purposes.”

The company apparently offered him a 50% refund and closed the case, but Mr. Kennedy persisted and eventually received a complete refund, as well as reimbursement for any additional expenses incurred by the pair.

I advised them that this property should not be listed because it is so dilapidated. It is in dire need of a comprehensive renovation, as it appears filthy, stated Mr. Kennedy.

After the ‘terrible’ encounter, he and his wife Michaela, 57, traveled to a hotel and spent £110 per night for their stay.

Airbnb states that monitoring devices are acceptable in shared areas, however hosts are required to declare all surveillance equipment in the ad.

Not authorized are concealed or private gadgets, such as those in bedrooms or toilets.

A representative for Airbnb told The Sun Online, ‘We have suspended this Host pending an investigation and are offering the guest our full assistance. We implement stringent regulations on recording devices and address the infrequent issues that are brought to our attention.

»A Spanish rental villa couple’s horror at spotting an SPYCAM«