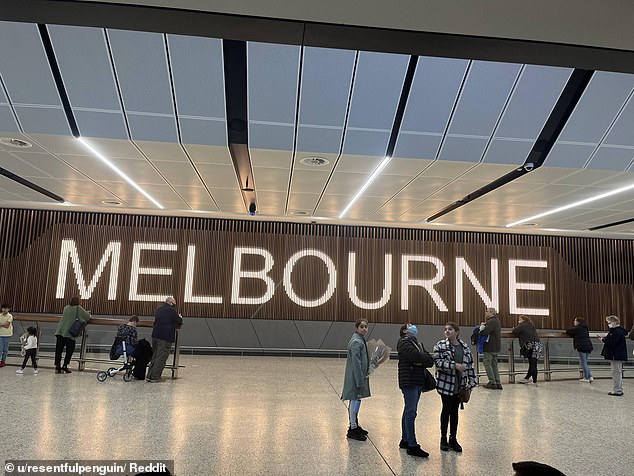 The international arrivals gate at Melbourne Airport has been criticized by a Reddit user as the “most uninspiring welcome” to the city.

The user uploaded a picture of the arrival gate and shared it on the Melbourne subreddit.

The least inspiring way to arrive in Melbourne is at the arrival gate at the international airport.

They wrote, “Change my mind.”

However, other Reddit users piled on and attacked the poster right away.

I’ve been to airports all over the world and have witnessed much worse, one person wrote.

Melbourne’s signage is, in my opinion, average.

I’m not sure what the OP expects, another person remarked. God knows I’ve been to a hell of a lot worse airports, even though this one isn’t the most exciting or dynamic.

A third person questioned: “I mean…what do you want?” It’s an easy-to-read sign that lets people know where you are.

Like, do they anticipate a marching band or some other form of welcome?

Another person added: “The name of the city is written there in big letters. signifies that you have reached the location you set out to reach.

A fifth person commented, asking why it must be motivational. You’re already there.

Once you have your suitcase, the airport is irrelevant.

Sixth person thought it was “timeless, classic, and unapologetically simple.”

Not everyone requires images of kangaroos and bridges.

Others, though, appreciated the original poster more.

One more said, “Yeah, Tullamarine is a rather boring airport after visiting overseas a fair amount.”

What do we do with all that parking money, asked a fourth user? Create a Melbourne sign that is extremely large.

A massive f***ing bonus for everyone else is a great idea, so let’s do that as well.

The airport in Melbourne is likely among the worst international airports I’ve ever traveled to, according to a fifth respondent.

The hectic scenes have been attributed to understaffed check-in counters, long lines at security checkpoints, and a surge of passengers.

Between June 27 and July 17, when school is out, Melbourne Airport anticipates receiving 2.1 million passengers, which is an increase of 400,000 over Easter.