Skip to content
Home » News » News » A pensioner who refuses to demolish a £500,000 home he unlawfully constructed is being dragged to court 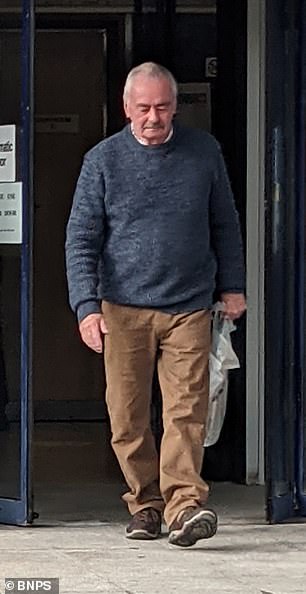 Peter Dick, age 74, constructed a £500,000 detached home on land he owned in 2010 without obtaining planning permission.

A senior citizen who unlawfully constructed a home on green belt land and refuses to demolish it is being hauled to court.

The chalet cottage is protected by an 8-foot-tall, 20-foot-long metal fence with a padlock and barbed wire to deter intruders.

In 2012, his request to legalize the property in West Parley, Dorset, was refused.

Local planning officials at the time described the red-brick home as “dull and featureless.”

He disregarded a 2012 court order to demolish the house and a 2019 injunction that gave him eight months to comply.

In July of last year, BCP Council took him to court for refusing to remove the structure in response to objections from nearby neighbours.

Mr. Dick reappeared before Poole Magistrates’ Court on a charge of a second violation of enforcement, which he denied.

Additionally, the council may decide to take direct action against Mr. Dick.

The chalet cottage is protected by an 8-foot-tall, 20-foot-long metal fence with a padlock and barbed wire to ward off intruders.

He was found guilty and ordered to demolish the property, but he disregarded the ruling and returned to Poole Magistrates’ Court to deny another violation of enforcement.

Mary Almeida, representing BCP Council, stated before the magistrates, “The parcel of property known as Longcroft in West Parley is in the green belt of south-east Dorset.”

‘A notice of enforcement was issued in 2012 and remains enforceable. Mr. Dick has not cooperated with the notice for him to dismantle the structure he has constructed on the property.’

In response to the magistrates’ inquiry as to why it had taken a decade to reach court, Ms. Almeida stated, “The council has attempted to engage with Mr. Dick to remove the infringing structure, but he has not done so.”

“Applications for planning approval, which were denied, were made to see if the residence could be rendered legal.

Due to its location, we must have the home removed.

Mr. Dick, who has been regarded as secretive and reclusive, said in a prior application that he turned a warehouse on the property into a residence in 2003.

In 2006, he and his wife moved into the property full-time, stating that at the time it was utilized sporadically, similar to a vacation house.

It is believed that he constructed a red-brick home adjacent to the steel-clad old warehouse in 2010 and sought retrospective approval for it.

The property is situated on agricultural land of Grade 4 and is within 400 meters of a protected heathland, a special conservation area, and a site of particular scientific importance.

In July of last year, BCP Council brought him to court for refusing to dismantle it in response to complaints from nearby homeowners, where he was convicted guilty and forced to demolish the house.

David Kelsey, head of the planning committee of BCP Council, stated, “He appears to believe he can do whatever he wants.”

The plot lies on agricultural land of Grade 4 and is within 400 meters of a protected heathland, a special conservation area, and a site of particular scientific importance.

David Kelsey, chairman of the planning committee at BCP Council, stated, “He appears to be one of those individuals who believe they are exempt from following the same planning regulations as everyone else.”

It is disappointing for all parties involved since it sends the incorrect message, and the court agreed with us that the house was constructed unlawfully.

He continued, “The issue with constructing something without authorization is that you face the danger of losing it in the future.”

Building on green belt property is a particularly awful idea; it’s an absolute no-no. There are planning laws for a purpose. What would occur if everyone constructed anything they desired?

“He will have to remove it at his own expense; I wish he had given it much more consideration from the outset.”

A representative for the BCP Council stated, “We are conducting enforcement proceedings against Mr. Peter Harry Dick for the illegal construction of a home on his land in West Parley.”

“In July 2021, following a trial, Mr. Dick was found guilty of failing to comply with a valid demolition order, which compelled him to demolish the structure. He was given four months to comply with the notice of enforcement.

“Officers have subsequently communicated with Mr. Dick, visited the property, and saw no effort to comply with the notification.” Therefore, we have resumed legal actions. If found guilty, Mr. Dick’s fines and court expenses may increase.

Additionally, the council might take direct action against Mr. Dick.

“We have a strong commitment to planning enforcement and the protection of our local environment, and we will continue to investigate and pursue concerns brought to our notice, as well as take official action and prosecute where necessary.”

Mr. Dick will be in court in February of next year.

»A pensioner who refuses to demolish a £500,000 home he unlawfully constructed is being dragged to court«