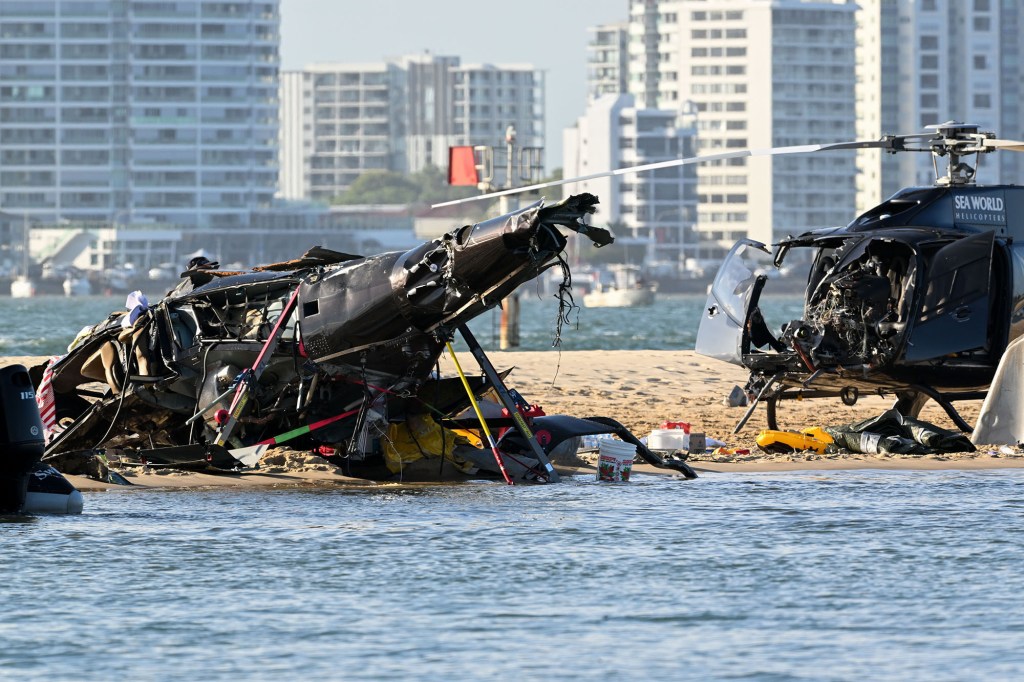 Monday, four persons were murdered when two helicopters collided in midair over a packed beachfront in a renowned Australian tourist destination.

The horrific accident occurred near Main Beach on the Gold Coast of Australia and included two Sea World Helicopters carrying a total of 13 persons, including the pilots.

One of the pilots perished in the collision, while the other miraculously landed his aircraft safely on a sand dune despite the fact that it had been damaged.

“Considering the damage to the left-front area of the helicopter, where the pilot was seated, this is a remarkable feat,” said Angus Mitchell, chief commissioner of the Australian Transport Safety Bureau, whose office is investigating the disaster.

“Thus, while it is unfortunate that four people have died and many people are in mourning this morning, the situation might have been much worse, and the fact that one aircraft managed to land is pretty extraordinary,” Mitchell said.

After their fatal accident on Australia’s Gold Coast on Monday, two mangled tour helicopters remain on the coast.

The victims have been identified as Diane Hughes, 57, and her husband Ron Hughes, 65, both of the United Kingdom; Vanessa Tadros, 36, of Sydney, Australia; and Ashley Jenkinson, 40, an experienced Sea World Helicopters pilot.

In the collision, three passengers, including two children, were critically hurt.

Tadros’s 10-year-old son and Geelong resident Winnie de Silva, 33, remained hospitalized in critical condition. Leon, the 9-year-old son of De Silva, was reported to be in stable health by the Sydney Morning Herald.

Neil, the husband of De Silva, stated in the GoFundMe campaign’s description that his wife and kid “are both alive but have extensive surgery ahead of them.”

The Hughes of Liverpool wed in August 2021 and afterwards flew to Australia to visit Ron’s adult daughter and her family, according to The Guardian.

Jenkinson had worked as a chief pilot at Sea World Helicopters since 2019, and friends praised his mentorship and the assistance he provided during catastrophic floods in New South Wales last year. The Gold Coast Bulletin stated that he and his partner welcomed a son in September.

Jenkinson’s close friend Ritchie Gregg characterized him as a “gentle giant” and a “quiet hero” to BBC News.

Jenkinson’s chopper had been airborne for less than twenty seconds when it collided with a second Sea World helicopter that was attempting to land.

Gregg remarked, “He was always supporting the community, from the bushfires a few years ago to the flood floods last year.”

Without him, many individuals would not have received the assistance they did, said the friend.

Jenkinson’s Airbus helicopter had been airborne for less than twenty seconds when it collided with a second Sea World helicopter that was attempting to land.

Mitchell reported that the main rotor blade of Jenkinson’s aircraft collided with the cockpit of the descending helicopter.

“This caused the main rotor and gearbox to separate from the helicopter, which tragically resulted in the aircraft having no lift and crashing severely to the earth,” he said.

Investigators will work to determine what went on in the cockpits of the helicopters at the time of the collision.

Two couples in their forties from New Zealand and a lady of 27 from Western Australia were among the passengers on the chopper that landed safely. After being pelted with glass, three of the five passengers remain hospitalized with non-life-threatening injuries.

Investigators remained at the crash site, but a rising water made collecting evidence there more difficult.

Mitchell stated that investigators wished to determine what was happening in the cockpits at the time of impact.

Village Roadshow Theme Parks, the owner of Sea World Helicopters, issued a statement in which it claimed it is cooperating with authorities and “expressing its sincere condolences to all affected” by the accident.

When this helicopter crashed, there were five visitors and one pilot on board.

“Australia is appalled by the dreadful and tragic news of the helicopter crash on the Gold Coast,” he posted on social media.