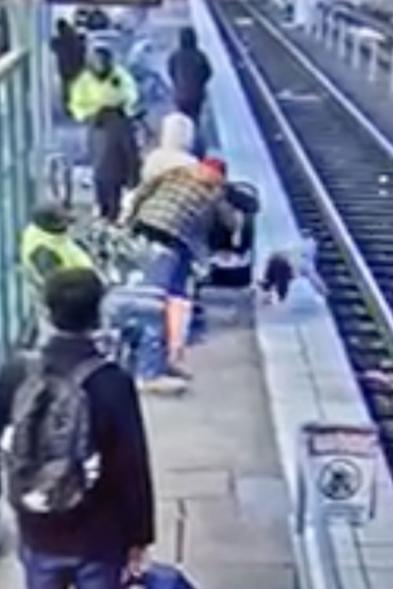 Wednesday, a woman was arrested for reportedly dragging a 3-year-old daughter “face-first” onto railway tracks in Oregon in a horrible crime captured on camera, according to prosecutors.

Video footage reveals that the child was unknowingly standing close to her mother on the MAX station at Portland’s Gateway Transit Center when the vicious assault occurred.

According to the video and the Multnomah County District Attorney’s office, a stranger — believed to be 32-year-old Brianna Lace Workman — sitting behind the mother-daughter combo abruptly rises up and shoves the 3-year-old forward.

The girl, who was standing just outside the white caution line, struck the ground first and plunged head-first over the edge.

“The child was swiftly retrieved from the train tracks after landing face-first on the metal rail and rocks,” Multnomah County District Attorney Mike Schmidt said in a statement.

Even though the girl’s head is visible making contact with the railing, she instantly got up and reached for the good Samaritans who had jumped to her rescue. Schmidt stated that the child later complained a severe headache and had a small red mark on their forehead.

A woman from Oregon is accused of pushing a child off a train station.

The footage depicts the woman who pushed the victim sitting back on the bench as onlookers pull the victim to safety.

According to the district attorney, the child did nothing to cause the attack.

»A mom pushed her kid ‘face-first’ onto Oregon subway tracks«