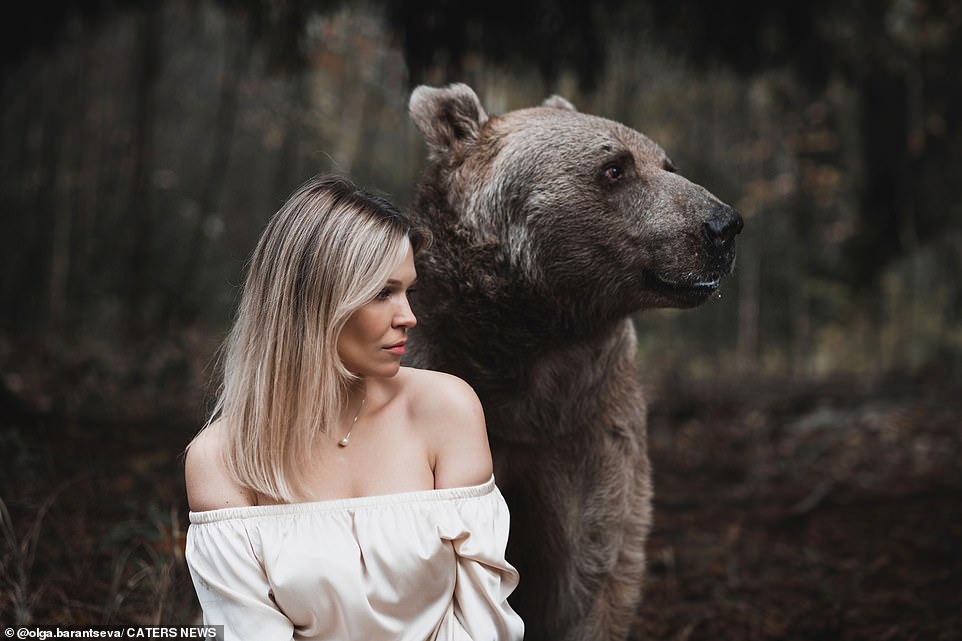 A series of intimate photographs depict a model posing with a 350-kilogram Russian brown bear.

Zhana leaped at the opportunity to picture with the bear, who has had a vegetarian diet since he was a cub and has followers from all around the globe.

To organise the shooting, photographer Olga Barantseva contacted Stepan’s owners, Svetlana and Yuriy Panteleenko, who adopted the bear when he was only three months old.

In these photographs, Zhana, a native of Moscow who now resides in Cyprus, can be seen caressing and petting the bear while wearing a tiara and a long white dress.

Zhana said: ‘I am a teddy bear artist and toy maker of 14 years.

‘Ever since I can remember I’ve been obsessed with stuffed toys, especially bears, they were my constant companions.

‘So, after graduating from university, I decided to try sewing my first toy… I haven’t stopped since.’

She added: ‘Recently, I decided to switch to making more realistic bears and while looking for inspiration, I learnt about Stepan.

‘It’s been a life-long dream to see a bear up close, and to watch these magnificent animals move freely.

Zhana described the bear as ‘truly unique’ for being ‘a rescue [animal], a family member, and a friend’.

She said: ‘It shows in the way he behaves with his mom and dad. He is treated with such kindness and respect, and he gives that back.

‘He is gentle, he even holds you with so much tenderness despite his size and weight.

‘I was very, very, lucky to meet Stepan. It’s a unique experience I will forever cherish.’

Olga said that she has always enjoyed shooting people with animals, and a few years ago she watched some television broadcasts featuring the bear, who has also been in several Russian films.

Stepan was caught by hunters who attempted to sell him on the open market.

He was saved by the Panteleenkos when he was a cub.

The bear had several cuts and wounds when he was discovered, so they brought him home so he could recuperate.

The almost 2-meter-tall bear sometimes watches television with his owners in the evenings, and he even helps to water the plants.

‘What I want to show is that the world can live in harmony. I’m inspired by Russian fairy tales – as they’re usually full of love and kindness, where people and nature live in harmony.’