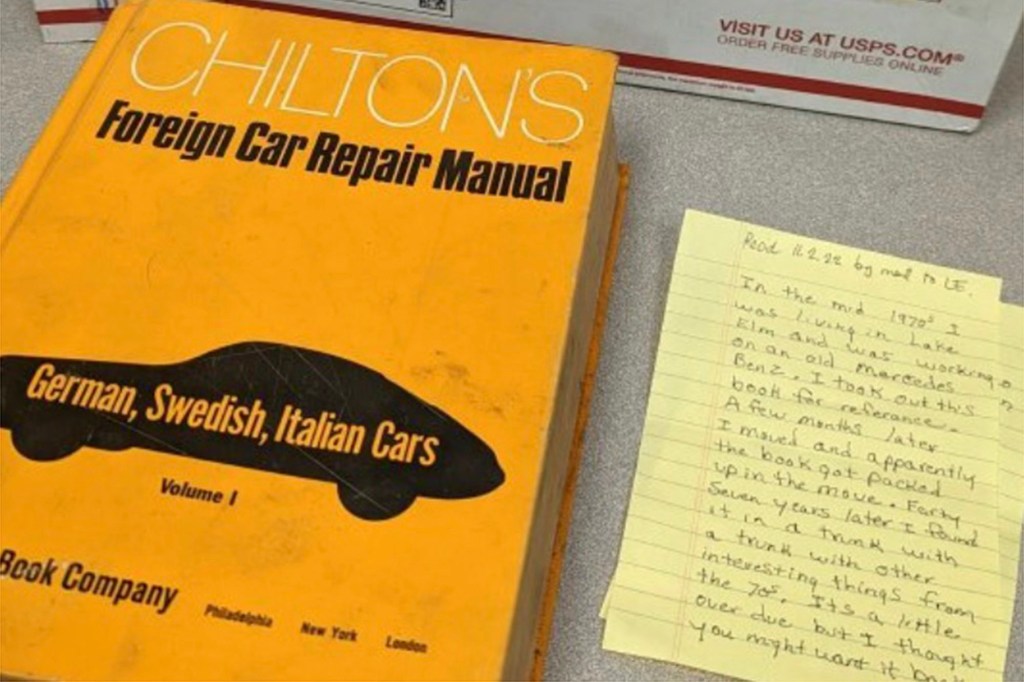 They had the option of throwing the book at him.

“It’s a little late, but I thought you may want it back,” the anonymous letter’s author wrote. “I apologize to everybody near Lake Elmo who worked on an old Benz during the past 47 years.”

The individual also stated why they had kept the book for over fifty years.

“I lived near Lake Elmo during the mid-1970s and worked on an old Mercedes-Benz. “I borrowed this book for research purposes,” the author writes.

The Lake Elmo, Minnesota, library has just returned an automobile repair handbook that was checked out 47 years ago.
Instagram/washcolib
The anonymous borrower sent a letter with the book stating, “It’s a little late, but I thought you may want it back.”
Instagram/washcolib

“A few months later, I relocated, and the book was allegedly packed away. After forty-seven years, I discovered it in the trunk together with other intriguing items from the 1970s.”

The Washington County Library System published the story on Facebook, noting that it was glad to receive the book back and informing the borrower that no late fines will be assessed.

According to UPI, the library stated, “The writer was also concerned about late fines, but because we don’t charge them, there’s no problem.”

A Facebook user inquired as to when the library will no longer assess fines for overdue books.

“Good question! The Library System said, “We haven’t had late fees for a long time, but we do charge a replacement cost if an item is lost or damaged.”

“In January, we also abolished what was referred to as a ‘processing fee’ for highly overdue products, so there are now no fees for late materials, just those that are lost or damaged,” the statement said.